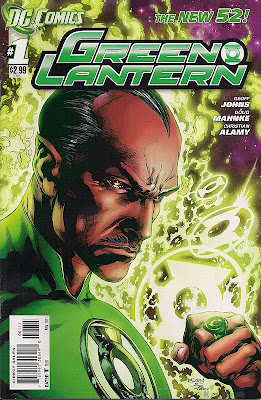 It's been awhile since I dropped the Green Lantern titles, bored rigid by the Crayola Corps, but I'm always hoping for a new jumping-on point. And here it is. Sinestro as GL isn't an enticing prospect, admittedly - waste of a perfectly good villain - but if it means getting to see Hal Jordan putting time in on Earth, I'll take it.

This issue opens with Sinestro charging the ring that has 'chosen' him and being charged by the Guardians of the Universe with keeping the peace in his home space sector. Sinestro wants nothing of it, but the Guardians, rather than declaring the ring insane and melting it down for scrap, interpret it as meaning Sinestro deserves a shot at redemption.

Except for Ganthet, ever the voice of reason. The Guardians, rather than embracing the voice of polite dissent as they're embracing a mass murderer (yes, Sinestro abused his Green Lantern status, but he 'believed it was for the good of his world'), gang-blast him. Whether they're lobotomising him or literally changing his mind, we'll see soon enough. What can't come soon enough is the crushing of this bunch of little dictators ... it's almost as if writer Geoff Johns thinks the only way to make us root for Sinestro is to make the Guardians differently objectionable.

On Earth, Hal is learning that being away for months on end isn't the way to keep a tenancy, showing that he doesn't need a magic ring to play the hero and annoying Carol Ferris with his adolescent insensitivity. I find it all endearing, a reminder of why I liked Hal in the decades before he began getting lost in the crowd/never-ending storylines; he's a hero, but a very human one.

Carol, too, is eminently likable, a woman ruled by her passions. I've no idea what her current status is as a Star Sapphire, Pink Parasol or whatever, but if anyone's going to get me to try the new Emerald Warriors book, it's her. (Nothing on God's Earth will persuade me to plump down hard-earned money for Vomity Lanterns, and the new Green Lantern Corps comic looks like a lot of silly slashing.)

Johns' script is pretty deft, unshackled from a massive space epic. There's action as Hal gets into a brawl and Sinestro kills one of his old Sinestro Corps pals - hurrah for redemption! - but plenty of room for character moments. Hal gets the best line, as Carol buggers off from their dinner date in a right old huff (click on image to enlarge).

See what he did there?

The issue ends on an intriguing note, one which guarantees I'll be back next issue, and probably every issue after that so long as the storylines don't get too Byzantine.

Odd panels in which Hal looks like a wax model apart (hey, it may be a subplot, all that time in space has wrecked Hal's skin), the pencils of Doug Mahnke and inks of Christian Alamy and Tom Nguyen make for good-looking stripwork. At times there's a pleasingly Gil Kane feel to the finishes - I like that Hal's artistic father may still be influencing him.

And I lke their Sinestro - world weary, sarcastic, contemptuous, he knows he's surrounded by idiots. It doesn't make him a good guy, but it adds to the interest.

Colouring the book is the exceedingly talented David Baron, who does a great job of contrasting Earth with outer space. And he remembers that Hal's smalls must be green. The final artist on the interior is Sal Cipriano, who provides the sharp lettering.

Sadly, my cover is pristine, without the green ring that's causing DC to recall issues, and likely sending the book's 'value' shooting up. Still, at least it means I can enjoy the compelling image of a smouldering Sinestro as intended. Good work from Ivan Reis, Joe Prado and Rod Reis.

While Hal Jordan's continuity hasn't been changed by the New 52/Flashpoint shuffle, it's given the Green Lantern solo series a real shot in the arm. I'm not delighted Sinestro is the title character, but it won't last, and I look forward to seeing where the book goes after that.
Christian Alamy DC New 52 Doug Mahnke Geoff Johns Green Lantern #1 review Ivan Reis Joe Prado Rod Reis Sal Cipriano Sinestro Tom Nguyen