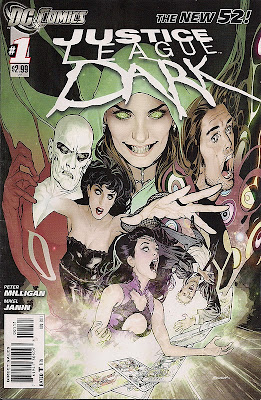 Super-heroine the Enchantress is broken. Gone mad, her gnarled form hurls hideous spells at the Justice League of America. Elsewhere, simulcra of her former host, June Moone, walk into the path of motorway traffic, dying horribly. Watching from afar, tarot reader Madame Xanadu tells alien madman Shade the Changing Man that only specialists can repair the Enchantress and the damage she's caused. Justice League member Zatanna seems to have come to a similar conclusion, contacting the British con-magician John Constantine. And June Moone Prime has gone looking for Deadman.

This is very much a first chapter, with little in the way of explanations but enough weird incidents to bring me back next time. While the idea of these magical misfits as even a semi-formal Justice League offshoot is ludicrous, I love the idea of them all in one comic - Madame Xanadu, Zatanna, Deadman. Enchantress and Constantine are favorites. And Shade has a pretty coat.

Featured Leaguers Superman, Cyborg and Wonder Woman are strangely rubbish in the face of the Enchantress' wayward spells. While Superman has traditionally been uncomfortable with enchantments, and this new Cyborg seems not to be pals with demi-demon Raven, Wonder Woman herself is a child of magic, one who regularly encounters gods and monsters - it's odd that she hasn't the slightest idea of how to approach the situation.

But I suppose that's how it must be - if the regular Leaguers can handle mystical threats, there's no need for this title. As it is, Zatanna, the League's magician-in-residence, is moving across to this book. In this issue she's not deployed in the first line of attack, which is a head-scratcher; it turns out Batman is worried that she's not currently 'stable' enough for the job. Not impressed, before you can say Kcaj Nosnibor, Zatanna binds him and wanders off to confront the Enchantress.

Pete Milligan's script is sharp and deliberate, slowly introducing us to most of the main cast. Madame Xanadu's opening lines are wonderful, and her narration just gets better from there, building the tension until we reach the comic's terrible final image.

It's an image superbly brought to life by illustrator Mikel Janin and colourist Ulises Arreola, and typical of the quality of their work throughout. Their Enchantress is a hideous creature, Madame Xanadu is mysterious, Shade mad, Constantine hapless, and so on. Their naturalistic take on the heroes makes the surreal moments of terror, such as the opening spread, stand out all the more.

That first spread also showcases the lettering skills of Rob Leigh, in the shape of some attractive title designs. The title of the issue, 'Imaginary Women', turns out not to apply solely to June Moone's doubles, making for a very sad scene centred on one longtime supporting character.