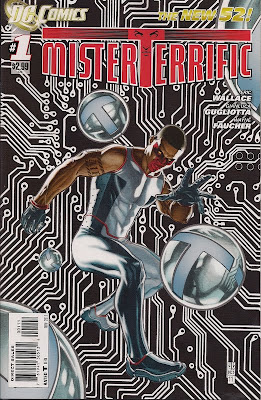 Mr Terrific may have been tweaked in DC's New 52 Universe but one thing's for sure - Michael Holt just can't shut up about how clever he is. He saves Londoners from a small-time super-villain and it's, 'some people call me the third smartest man in the world". He reminds himself in his narration that 'they say I'm the third smartest man in the world'. He even hangs out with a kid who brags about an IQ of 192, and sleeps with fellow scientific genius Karen Starr.

It's awfully wearing.  We get it, Mike - you're a smart guy in a smart world and only a couple of people are smarter than you.

I suppose I should have expected this, it's Mr Terrific's first solo book and he needs to establish his creds - third smartest man, number one braggart. Hopefully, he'll relax a bit in future issues. Maybe buy a really big sports car.

More worrying than the ego - the clue is in the name - is this issue's preoccupation with race. Mr Terrific tells those selfsame Londoners: "Actually, a simple 'thanks Black Guy for saving us from a homicidal lunatic wearing weaponized body armour will do'," as if a non-White face in the UK is a novelty.

I could let that go as a cultural misunderstanding on the part of writer Eric Wallace, but later in the issue there's this exchange (click on image to enlarge). 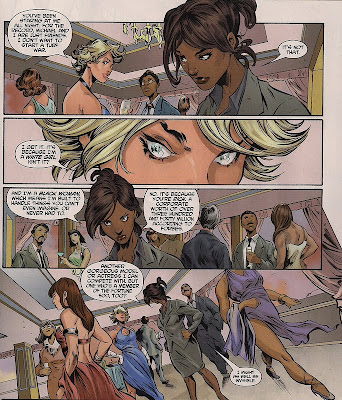 Are there really so few avenues to interpersonal conflict that we have to do Black v White, concurrent with two smart women arguing over a man, in the first issue?

(And Karen - who may or may not be Power Girl, it looks like we're about to find out next issue - is so dissembling here; sure, she and Michael may be just friends, but they sure seem to be 'friends with benefits'.)

The mystery to be solved by Mr Terrific has people snapping and speaking their minds, as their IQs go off the scale. That's right up his street, or rather, tesseract - he has a secret headquarters in 'the Ninth Dimension, another excuse to pat himself on the back. Honestly.

Wallace's script is overly expository, even for a debut issue, but I'll give him the benefit of the doubt and try a few more. He does get points for flashing back to Holt's motivation for becoming Mr Terrific, with an interesting change from the origin as seen in the Nineties Spectre series.

Gianlucca Gugliotta's artwork, inked by DC stalwart Wayne Faucher, tells the story well enough, with good layouts and no skimping on backgrounds. Mind, I'd have expected a Ninth Dimension HQ to look a little more interesting than what we see here. And some of the heads are rather oddly shaped; Michael, on the important final splash, suffers from an especially awkward upshot. The tweaked costume doesn't look bad, but Mr Terrific looks so much better with the 'Fair Play' leather jacket (and if he's meant to have a secret ID, that 'Fair Play' tattoo demotes him to way below 'third smartest man'). Karen Starr, meanwhile, dons a party dress with a cut-out circle. Funny that.

JG Jones's cover is a beaut, I hope he's a regular around these parts.

So, not my favourite of the latest batch of first issues, but not awful either. I'll give the world's third smartest man until his third outing. If I give up on him, then he'll be smarting.
#1 review DC New 52 Gianlucca Gugliotta Mister Terrific Power Girl Wayne Faucher