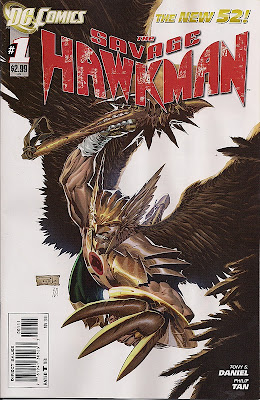 Carter Hall has had enough of being Hawkman. He drives to a remote spot, blasts and burns his costume and buries it. But the alien Nth Metal contained within the outfit isn't done with him. Manifesting as a phoenix, it burns Carter. Next thing he knows he's waking in his apartment, naked. A visit from a colleague prevents him pondering the situation - he's wanted by his treasure hunter boss to translate inscriptions on his latest find, the wing of an apparently alien vessel.

That's not all Professor Hank Ziegler has found - there's some kind of mummy, from which a fluid sample has been extracted. Said sample transforms one of the scientists into a creature, and Carter goes in swinging, but each time he hits the monster, a new one sprouts from the body part. Still he fights, not caring that he no longer has the power of Hawkman.

Or so he thinks. His skin throbs and a new Hawkman costume pushes through, wings and all. Carter has enhanced strength once more, allowing him to give the chief alien - who introduces itself as Morphicius - a real fight. But as the issue ends, the monster gains the upper hand ...

Well, this DC New 52 title is better than expected. The blurbs had me thinking we'd see an all-new Carter Hall, but aside from the odd background tweak - rather than being a museum curator, he's an archaeological translator - it could be the same guy we've been reading about for years. Certainly, the beginning of this story makes sense in terms of the most recent DC continuity - Hawkman has had enough and the loss of his true love Shayera is the last straw.

Or not. Whatever the circumstances, Carter Hall has been the superhero Hawkman, and wants to retire the role. Shooting the costume? Distinctly odd, but perhaps it's an anthropological thing; he sees it as a necessary precursor to a symbolic burial.

The new Hawkman costume looks far better inside the comic than it does on the cover. I blame the claws, they're so prominent as to look silly. As it is, the first appearance of the suit looks great. Except for one thing. 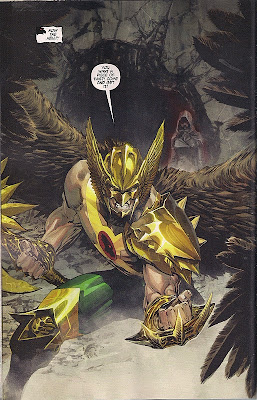 Which Brainiac decided that the obligatory insertion of the New 52 Mystery Hooded Woman should come on an important splash? I'm fine with her as a titchy figure in the background, as with every other comic this month, but giving her this much prominence begs the question: what role does she have in Hawkman's story? To which the answer is, none, confusing readers who don't keep up with the comics internet.

Writer Tony S Daniel has given his first villain the worst name this side of 'Atrocitus', but Morphicius has presence and power and fits nicely into the world set up here. Carter sounds more of a tough guy than in the past, but that's 'savage' for you. The main thing is, he's still the hero, wanting to help people whatever the cost to himself. New supporting character Prof Ziegler is a walking plot generator, while his daughter, Emma, is pretty and smart, so looks set for the role of girlfriend and future Hawkgirl. I do hope Daniel swerves and either leaves her as a friend, or has Carter fall for his other colleague, Terrance (DC could call this book The Dan Savage Hawkman).

Philip Tan's artwork is strong and dramatic, with the standout moment being the early spread featuring the Nth Metal phoenix. And to my eyes there's an echo of the great Joe Kubert, Hawkman's founding artistic father in the Silver Age. Adding to the intense look of the pages are the colours of Sunny Gho, while letterer Travis Lanham does a good job of contrasting Carter's narration with dialogue in the word balloons.

DC pushed this debut as 'Conan with wings' but really, it looks set to be simply 'Hawkman'. After all, previous versions of the character have never been averse to bashing soft-shell criminals with a mace. On the basis of this first issue, whose only real lack is the fact that there's no chance to show our hero flying, I'll be back for more.
Dan Savage DC New 52 Philip Tan Sunny Gho The Savage Hawkman #1 review Tony S Daniel Travis Lanham