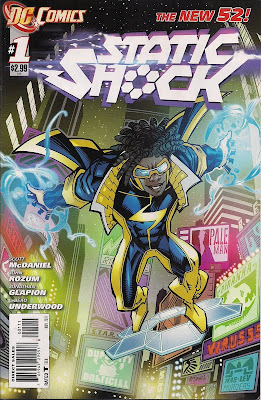 I've not read many comics with Static in them, just a handful of Teen Titans. Obviously a good kid, electrical powers, seems to use them to manipulate a flying disc. So here's a chance for me to be pretty much the fresh reader whom the New 52 books hope to grab.

In shutting down a plasma-powered guy, Static annoys cranky, ungrateful New Yorkers. He's working with the hero Hardware to investigate 'crazy, suspicious stuff' at research facility S.T.A.R. Labs. Annoyed by his interference, criminals known as the Slate Gang order his death at the hands of a big green energy chap, Virule. Away from the costumed capers, Static - aka Virgil Hawkins - settles into his new Harlem home with his genial parents and sister.

Doesn't sound bad? Maybe it isn't, but on the basis of this issue, it isn't for me. My problem is the storytelling. The book opens on action, with Static pursuing the plasma guy, someone he refers to as Sunspot, as if he's an established super-villain. It turns out he's only just stolen the tech suit from S.T.A.R Labs, at the behest of the Slate Gang. There's no decent establishing shot of  the grunting, uncompelling 'Sunspot', all we get is a crackly ball with a vaguely human shape inside.

Later in the book, Static is suddenly talking to Hardware. No greeting, no introductions, we're evidently meant to know who the hologram fella is. He gives Static some kind of gift, which Static reckons is the best thing ever, but what it is, isn't clear - it seems to be a GPS system that superimposes outlines on skyscrapers.

Static asks Hardware why everyone at Wright's Tools, where he has a secret HQ, is wary of him, something we don't see. Virgil tells us he's had a rotten day at school, but we aren't shown that either. There's no look at Virgil interning at S.T.A.R. Labs. Experts there are apparently involved with Virgil's sister, but what that's about, I've no idea. And Hardware has problems in Dakota, but they're a mystery too. I realise that the kid has a busy life, that mysteries and future storylines have to be set up, and you can fit just so much into 20 pages, but this being the case, why not hang fire on mentioning certain things until they can come up naturally?

The Slate Gang look to be crooked public servants running a bunch of colourfully clad flying scooter riders, but we're given neither codenames nor specialities. Visually, they're as imposing as cardboard goldfish. Virule looks scarier, as does someone called the Piranha, but we're not told what these guys can do either. Does the Piranha eat people? Is Virule virulently virile? Too many villains, not enough information.

And what's this guy doing in the background? No one so much as acknowledges his presence.

Something bad happens to Static on the last page, but the image is so busy I didn't notice at first.

Again and again, I found this debut issue frustrating. Normally I'd assume a breakdown in communication between writer and artist, but in this case they're the same person. Scott McDaniel is pencilling, and he's also co-writing with John Rozum. And I think McDaniel is why I'm not getting along with this book - either his storytelling isn't up to snuff, or I'm simply lacking when it comes to 'reading' his dynamic visuals. Like this one,  in which Sunspot electrocutes Static - or, at least, his coat. 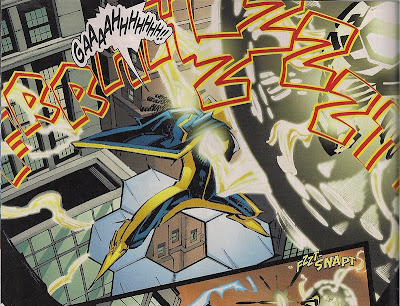 And as McDaniel is a popular artist, I'm happy to accept that it's not you, Scott, it's me.

In which case, I can only thank this book for its attempts to entertain me, and wish it the very best. With 52 new monthlies from DC, there's no way every book can please every person. I'm sure I'll check in with it again - I like Virgil, and the science facts dropped in are fun - but meanwhile, I'm out.
DC New 52 John Rozum Scott McDaniel Static Shock #1 review