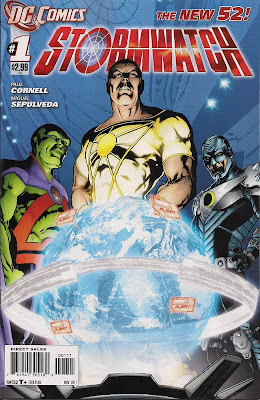 When DC announced that founder member J'onn J'onzz wasn't in the new version of the Justice League, eyebrows were raised.

It turns out that he has bigger fish to fry. For while the League is concerned with Earth-based menaces, the Martian Manhunter is looking to the larger picture. He's an associate of Stormwatch, a mysterious organisation of superbeings which, 'King of Cities' Jack Hawksmoor tells a potential new recruit in this debut issue, 'has been protecting the world from alien threats for centuries'. And given that a flashback shows one member apparently fighting as one of Etrigan's Demon Knights hundreds of years ago, I'm inclined to believe him.

The man Stormwatch tries to sign up in Moscow is nicknamed Apollo, their interest piqued by the fact that he seems strong enough to take down Superman, if need be. But Apollo is, it's fair to say, not keen.

Back at Stormwatch HQ, leader Adam One ignores cyber-soul the Engineer's suggestion that back-up be assigned to master swordsman Harry Tanner, 'the Eminence of Blades'. He's on the moon investigating strange quakes, and Adam reckons he's good enough to handle a reconnaissance mission on his own.

Adam himself teleports down to the Himalayas with 'Spirit of the 21st Century' Jenny Quantum to investigate a massive alien horn that's turned up.

What's the big idea? There are so many in this comic that it's unfair to single one out. Best to discover them for yourself in this re-imagining of the Wildstorm book, which sees characters and concepts emerging anew in the new DC Universe. All members of Stormwatch earn their 'screen' time as Cornell taps into the talent for bringing together engaging personalities that made his Captain Britain and MI13 run at Marvel a delight. Some of the characters here are fresh takes on the Wildstorn cast, others - such as the Projectionist and Harry - are new. J'onn has been in DC Comics since the 1950s, but fits in comfortably so far.

There's an awful lot going on in these 20pp but it's all intelligently laid out so as to be crystal clear - Cornell's skill with structure will be familiar to anyone who's seen his Doctor Who work, or read his prose fiction.

The storytelling of illustrator Miguel Sepulveda is also key to the success of this opener. Emotions are obvious without being excessive, and characters look to have depths to be mined. Cosmic creations and street-level scenes are equally convincing, while he draws not one, but two, of the best J'onn transformations I've ever seen (click to enlarge).

Allan Passalaqua looks to be enjoying himself, filling the pages with tones to tease the eyes, while Rob Leigh's lettering is neat and nicely varied. Nathan Eyring does a lovely job of colouring Sepulveda's cover, an intriguing depiction of Stormwatch as the heroes who look down on us.

Never having read an issue of the previous incarnations of Stormwatch, I thought I'd have to do a bit of Googling as I read this comic. I was happily wrong - the combination of the DCnU's clean slate, and Cornell's reader-friendly ways, make this a smooth read. It's a beautifully crafted book you can dive right into and enjoy, as the secrets and surprises flow.
Allan Passalaqua DC New 52 Miguel Sepulveda Nathan Eyring Paul Cornell Rob Leigh Stormwatch #1 review