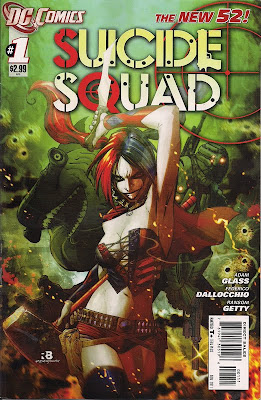 The new Suicide Squad are in trouble. Captured by unknown assailants, they're being tortured. The deal is simple - give up the secrets of the Squad, or die slowly and painfully. A scorching blade. Pincers to the face. Salt in a wound. Deadshot, Harley Quinn, Savant, King Shark, Black Spider, Voltaic and El Diablo... one of them reaches their limit. The rest face a big surprise.

This new take on a DC classic begins with torture and ends with the promise of mass murder. We flash back to see how a few of the characters won their latest stint in Belle Reve prison, then it's back to the nastiness.

Deadshot seems to be basically the same guy we're familiar with from the Suicide Squad's golden days and, more recently, Secret Six; he's lost the 'tache, but seems to still have a little girl. Harley Quinn is nastier than I remember. Savant is in no way the same guy we saw in Birds of Prey. King Shark seems to be the Secret Sixer, but with a new head and - God help us - a thong. Black Spider looks bulkier than the Bat-villain I'm familiar with. And Voltiac and El Diablo are new to me.

And that's how they'll likely remain, as I don't fancy any more issues of this. The existing, tweaked characters seem that much nastier, and it's not just the villains - there's a well-known Squad face here who's unrecognisable. Well, unless you only know her from TV and film ...

It's not that I don't appreciate the final twist, but when the supposed good guys are more monstrous than the bad, I'm out. And while I'm intrigued by the mission set up at the end of this issue, and Adam Glass's writing is technically rather good, as with his Flashpoint Legion of Doom mini series, this comic isn't for me. Glass seems to take far too much joy in mutilating and killing characters; I get that this is the Suicide Squad, but deaths should be the exception, not the rule.

The art by pencillers Federico Dalloccio and Ransom Getty, and inker Scott Hanna, while not for the squeamish, is excellent. Standout scenes include the opening spread showing the down and out Squad from above; and the members heading for a mission, their personalities revealed by their physical attitudes (click on image to enlarge). 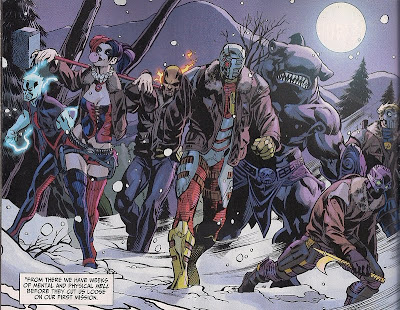 Ryan Benjamin's cover is impressive, but I'd rather see Harley Quinn than Harley Quim. The other guys may as well not be there

I'm disappointed by this book. I'd love to support a Suicide Squad series and hopefully I'll be able to before long, as everyone involved has the craft to make a great comic without resorting to over-the-top nastiness. All that's needed is a little editorial change of mind.