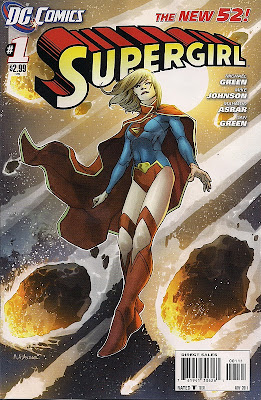 Meet Supergirl. She's got the unpredictable behavior of a teenager, the same powers as Superman – and none of his affection for the people of Earth. So don't piss her off!

That's the solicitation from DC Comics that's had me worried for the last couple of months. We had the moody, unpredictable Kara a few years back, and it's only over the last couple of years that a Supergirl worthy of the name - caring, thoughtful, measured yet never boring - has been restored. And then only after sales on her book tanked, as readers tired of the bad-tempered, easily led Lolita she was. The experiment having failed once, is 'loose cannon' really the way to go now that Supergirl is being reintroduced to longtime fans and, with luck, introduced to new readers?
As it turns out, the solicitation doesn't represent the story here.
I know, pick yourself up off of the floor ...

For while the Supergirl in this comic does come out fighting, it's because she's attacked first. And when she hurts people, it's because she doesn't understand the powers she's beginning to manifest.

The issue begins with Kara crashing to earth amidst a chunk of Krypton. In a nice touch, she hits Kansas, but doesn't land, instead carrying on all the way through the planet and emerging in Siberia. There's she's met by 'intercept teams' from the US (it seems there are agreements in place that the US gets to make first contact with aliens ... or else!) and attacked with some kind of mega-tasers. So of course she  lashes out.

As Kara fights back, confused by the local languages, her internal narrative reveals her to be a bright, family-minded young woman, with no memory of how she's wound up so far from Krypton. Bit by bit she discovers her heightened senses, until the extreme input incapacitates her, eliciting a super-scream. And maybe that's what attracts the attention of a certain strange visitor on the final page.

This was OK. Writers Michael Green and Mike Johnson introduce us to our lead character, dotting in some background while laying down some mystery. They show her powers clicking in, while underlining the US military's 'shoot-first' attitude to superhumans, as seen in other DC New 52 books this month. While Supergirl #1 is a speedy read, it's an enjoyable one, and Kara's reasonable nature has me relieved. My favourite moment is a homage to a Superman story of long ago, in which his out-of-control super-hearing had him picking up words from aross the DC Universe, illustrated by balloons pasted in from that month's comics. And I assume that's what's happening this issue (I'll get back to you when I've read more of the books).

Last time DC introduced Supergirl I remember moaning about her turning up naked. Childish titillation, said I. Put her in some clothing, already.

Be careful what you wish for.

Just look at this thing (don't click on image to enlarge, it'll only look worse). 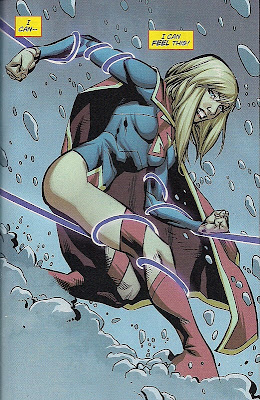 Fussy seams. Thigh boots that bare the knees. A tiny red panty shield that, by default, displays more thigh than a chicken on steroids.

It's ridiculous from every angle, and makes no design or defence sense. In the story, Kara indicates that the outfit is intended for her graduation, with her mother's approval. Strange school, stranger mother.

I've heard the arguments that it's the character that's important, not the packaging, but every time I see this monstrosity I assume Kara is insane. The costume is so hideous that it's tough to concentrate on the story. Even the talented Mahmud Asrar, inked by the superb Dan Green, can't rescue it. It needs to go, quickly.

Outfit apart, their Kara looks good - intelligent, pretty, athletic and not buxom. They convey that she wants to engage with the world, but is constrained by circumstances, and her growing frustration and desperation is there to see.

Asrar's design for the US warsuits is less successful: very Eighties, with shoulders so large that the wearers' heads look to be in their chests. They don't look remotely manoeuvreable. Nevertheless, the action scenes work, because much of the time Kara is simply bashing the things. The colours of Dave McCaig, and letters of John J Hill, add to the intensity of the visual experience.

So that's the latest debut of 'the Supergirl from Krypton' - decent, but not amazing. So far, I'm still wishing we had the most recent iteration of Kara Zor-El to the fore, but it's early days. The real test will come when we move past the origin and see how DC plans for Kara to interact with the new universe. Preferably in a nice twin set.
Dave McCaig DC New 52 John J Hill Mahmud Asrar Michael Green Mike Johnson Supergirl #1 review