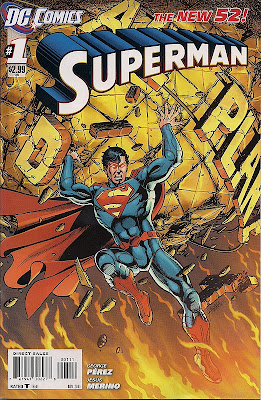 It's a new era for journalism in Metropolis. The Daily Planet has been bought by Galaxy Communications and subsumed into Morgan Edge's media empire, the renamed Planet Global Network, which encompasses print, TV and digital divisions. This means new roles for Planet staffers and the razing of the old building to make room for the new Daily Planet complex, bigger and, hopefully, even better.

Clark Kent has his doubts. Edge's existing newspaper, the Globe, has been embroiled in wiretapping scandals and its previous owner, Glen Glenmorgan, was a criminal, apprehended by Superman in Action Comics #1. But Lois Lane believes Edge is clean, and she's going to do her bit to protect journalism standards in Metropolis by accepting his offer to be executive producer of the nightly news and a VP of the digital division. Clark is not accepting her old job as TV news anchor - he's sticking with print.

He keeps away from the swanky shindig announcing the changes publicly, preferring to patrol as Superman. And so it is that he's on hand when a fire creature appears in Metropolis, one that proves quite the challenge until he finds the perfect weapon to use against it - the old Daily Planet globe.

Sly George Perez, beginning Superman's new run at a moment of change for Metropolis that echoes what DC itself is going through with the New 52 initiative. Like DC, the Planet is in a period of flux, doing what it has to in order to survive and as with DC, that means getting into bed with a former enemy, digital. So far, though, DC hasn't had any dramas to match the new Daily Planet's first day, as a fire demon - one muttering the word 'Krypton' - appears.

Superman's struggle with the creature is the perfect inciting incident to show how the different sides of PBN can work together. There's Jimmy gathering pictures, Perry White and Ron Troupe getting the newspaper reports on the street and Lois coordinating the TV and digital divisions.

And Clark? He's the side of Superman composing a report as he tries one thing after another to avoid casualties and property destruction. It's a different way to approach the narrative, and it doesn't quite work. For one thing, Clark seems to be no great shakes as a writer, filling his report with the kind of overworked, tautological prose (...a Tower of Babel of indecipherability') any journalism lecturer would knock out of him on his first day at college. For another, the device distances us from the moment. The panels in which Superman engages in banter with some small-time crooks have an appealing immediacy, and more of this would make for a better story.

Out of the horrendous new costume (dig those boot grips and that crazy collar!), Clark comes across as a gloomy Gus over the changing media landscape, and seems an especially sad sack in the much-previewed final scene, in which he learns that Lois has a chap. Lois, meanwhile, has integrity and guts, as much the woman of today as she was on her 1938 introduction; Clark seems stuck in the past - so much for the Man of Tomorrow.

DC gives us extra pages for our money here, 25 rather than the $2.99 format's usual 20, but Perez packs so much into them that it reads like a 40pp strip. He handles the reintroduction of old characters, and debut of new ones, superbly, and the way he coordinates the Planet's news operation is sharp. Perez honours the past with such winks as the Swan Towers building, Action News and of course, 'this is a job for Superman'.

Subplots include the question of where Superman has been for awhile prior to this issue and the origin of the giant horn also seen in Stormwatch #1. Hopefully the more backward real-life commentators won't get in a tizzy over Superman's single use of 'My God', or Lois' going to bed with a guy ... who knows what Clark was saying, or Lois was doing, off-panel in 1938 ... It's not that I see a need for DC to be quite so open about Lois' love life, but this is 2011, and Clark and Lois were intimate back in the Seventies. Only, then they called it 'boeuf bourguignon '.

Where the story falls down is in the depiction of the battle scenes - the fire demon, as pencilled by Perez, inked by Jesus Merino and coloured by Brian Buccellato - is meant to be vaguely humanoid, but it's in fact a raggy orange blob. 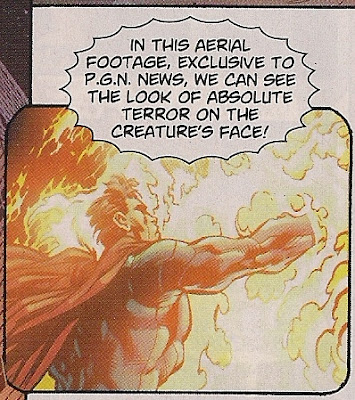 I don't know what went wrong in the art; occasionally you can make out a face a little like the old villain Brimstone, but for the most part the visual is too nebulous to engage.

Other than that, the art team deserves credit for just fitting so much on the page, and getting the story told. I'm a big fan of both Perez and Merino and while so far, they're not gelling brilliantly - I like a sleeker finish on Perez - I'm sure these two old pros will find a happy balance. Giving Clark Kent decent glasses would be a good start - he's back in those big round things John Byrne favoured in the Eighties, specs that would get him laughed out of any newspaper office. And Perry White as a silver fox is just jarring.

All in all, this is an enjoyably packed first issue. There are a few rough edges, but no one could accuse this comic of not being an accessible first chapter.
Brian Buccellato DC New 52 George Perez Jesus Merino Superman Superman #1 review