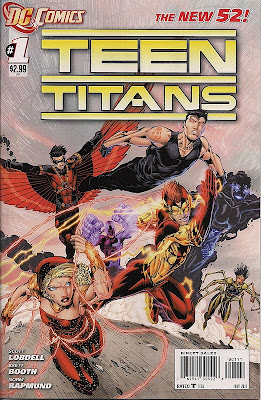 The newly minted Kid Flash makes a proper pig's ear of helping firefighters extinguish a blaze. Watching from afar, Red Robin isn't impressed but he has more immediate concerns - super-teens the world over are being kidnapped by a shadowy group. Offered a job with said bad guys, he tells the man from N.O.W.H.E.R.E where he can stick it, leaping out the window of his penthouse as he blows it up. Later he stops mysterious powered teen Wonder Girl being abducted and she returns the favour by pummelling a gun-toting chopper. Back at N.O.W.H.E.R.E. headquarters a decision is made to sic the metahuman clone Superboy on Red Robin and any allies.

This is a breezy read courtesy of writer Scott Lobdell, with a nicely structured throughline and good introductions to the reworked Red Robin (Tim Drake), Kid Flash (maybe Bart Allen, maybe not) and Wonder Girl (Cassie Sandsmark). While the first of these seems the same character from the previous continuity, the others are different - Wonder Girl is the teen rebel, happy to steal for reasons as yet unknown, and Kid Flash is the ass, full of knowledge but too impulsive to properly use it. Sparky Cassie is already more likeable than in her last incarnation as the Little Miss Moody of the superhero set. Kid Flash is annoyingly cocky, but I expect he'll change - it's likely we'll see Tim helping both newcomers become decent heroes down the line; I'm more keen to see what they'll teach the Teen Wonder.

Lobdell gives his heroes individual voices, provides plenty of action and adds some good gags. He's linking this book to Superboy's, but hopefully readers will be able to read one without being forced to buy the other.

I'm a tad perturbed to see Tim exploding a top floor flat willy nilly, but let's assume he's enough of a planner to have contained the blast so it neither kills his attackers, nor injures innocents nearby.

Penciller Brett Booth and inker Norm Rapmund do a commendable job of giving the three stars personality, and tell the story well, but the most interesting aspect of the art this time is the new looks. The Kid Flash outfit is basically horrific, but it appears cobbled together, which is good as a home-made costume is likely to change quickly. Oh yes, there he is on the cover, looking, er ...

... moving on, Cassie's hooded starfield pantsuit isn't bad, but the boob tube looks as if it's going to roll down at any minute. I do love her crackly red lasso, though.

Poor, poor Tim. He's had some great outfits as Robin and Red Robin, but suddenly he's junior Black Condor, with metallic wings where his cape should be. I'd like them gone, so he has to rely on acrobatics to get around and avoid bullets, like any good Bat-character.

There's barely a sign of the brand new members-to-be this time - one or two show up on Tim's wall of weird, along with such characters as Miss Martian and Changeling - but Teen Titans #1 nevertheless feels like a full course. The new guys will be here soon enough and given Lobdell's track record as creator of the excellent Generation X at Marvel, I'm sure they'll be worth waiting for.
Brett Booth DC New 52 Norm Rapmund Scott Lobdell Teen Titans #1 review