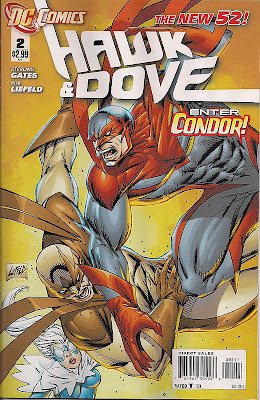 While Hawk and Dove fight to keep Washington DC safe from Alexander Quirk's Monsters of Mass Destruction, super-criminal Condor kills rival Osprey so his powers can turn a psycho into a Swan ...

... spotting a pattern? Yup, everyone's a bird. And everyone has a variation on the same costume: Hawk and Dove, Condor and Swan - without Matt Yackey's colours you'd have trouble telling them apart. 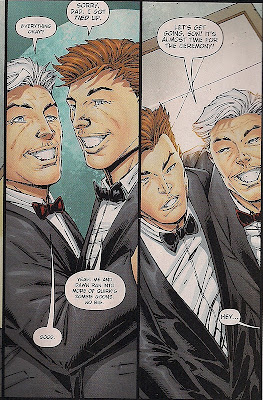 Actually, you'd have trouble telling anyone apart: Hank and his dad dress alike, share hair wax and have identical rictus grins; Hank's old bird Ren and Dawn go to the one hair stylist and both dress in tinfoil slit to the waist. And yes, I realise Ren is Asian-American, but most people in this book look Asian-American.
And everyone talks through a toothy grin. I swear, if DC wanted to conquer the ventriloquists' market, they'd show them Hawk and Dove.

'I'm going to gash your grains out, Hawk!'
'Gugger off, you gig guffoon, Dove has my gack!'

A few of the splash pages apart - there are five in this 20-page comic - the work here is awful. I'm not a Rob Liefeld fan, but when he's on form his art does the job. Here the illustrations - inks by Liefeld and Adelso Corona - are often excruciating. Body shapes are seen that are never found in nature, Hawk turns into a giant, a head twists like an Exorcist tribute act ... Liefeld either needs to take more time, take an art lesson or take on an inking partner willing to overpower his pencils and make the figures work. Maybe even - whisper it - draw in regular backgrounds.

Still, it's not like Liefeld is ruining a good story. The usually reliable Sterling Gates doesn't move the Quirk business any further on, Dove's Big Secret doesn't come up ... instead pages are wasted with unconvincing soap involving Dove's boyfriend Deadman and the aforementioned Ren - both centred on inappropriate jealousy.
As for all the Hawk and Dove-alikes running around, Kestrel was bad enough in their last series, now the book is going all Green Lantern on us with a horde of rainbow bird baddies. So next month it's Hawk & Dove vs Condor & Swan, which sounds like a court case. Certainly someone should sue for a painful reading experience.
This comic has so much potential, but so far it's for the birds.
Adelso Corona Hawk and Dove #2 review Matt Yackey Rob Liefeld Sterling Gates