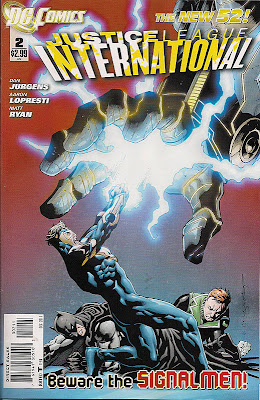 Inside Justice League International #2 we have the continuation of the battle with the mystery giant in Peru, and things don't go too well. Circumstances see leader Booster Gold take the tough decision to recall the team to Washington DC. There they find headquarters the Hall of Justice razed to the ground, and Green Lantern Guy Gardner finally taking up his offer of team membership. There's dissent among the ranks over Booster's decision - cowardice or pragmatism? - but a trio of heroes get firmly behind Booster and the rest of the infant team follows.

'Infant' being the key word here. Had Booster been given time to get to know the new JLI's capabilities and personalities, the fight in Peru would have gone a lot better. As it is, a lesson is learned and the team rededicates itself to stopping the giant. Except suddenly there are three more, with their leader about to descend from space.

Said leader looks an awful lot like Marvel's Galactus, as drawn by Lopresti and inker Matt Ryan and, more importantly, coloured by Hi-Fi; I'd not be surprised were his swatches to be switched out by next issue, as someone at DC decides he needs a less homagey look. That apart, the team of Lopresti, Ryan and Hi-Fi doesn't put a foot wrong, offering wonderfully clean storytelling that captures the unique looks of the various JLI members, and the action of their battles. And letterer Travis Lanham does a great job, and likely isn't responsible for the single mispointing word balloon.

One thing they really need to be drawing, though, is Godiva getting glue poured in her lovely, lustrous hair. The woman is a disgrace to the United Kingdom, with her heavy-handed flirting at a time when heroism is needed. I've no idea why writer Dan Jurgens would reduce a character so awesome she could turn her hair into an umbrella, complete with transparent eyescreen, into a desperate trollop, but he needs to redeem or repatriate her, and sharpish.

So far, Godiva is the only member I'm not liking, a situation which breaks this Brit's heart. The rest of the JLI have all stepped up, using their powers well - once they actually learn to combine abilities and act as a team, they'll be formidable. For now, I'm happy with 'enjoyable', something they're proving to be under Jurgens, and I'm looking forward to seeing the threat of the (so the title says) Signalmen getting bigger.

I'm intrigued that Guy drinks at a bar run by a chap named Beau - presumably named for Stephen Scott Beau Smith, longtime writer of Guy's old comic. And delighted to see that Booster is still palling around with sarcy security robot Skeets, even if he doesn't appear on panel this time.