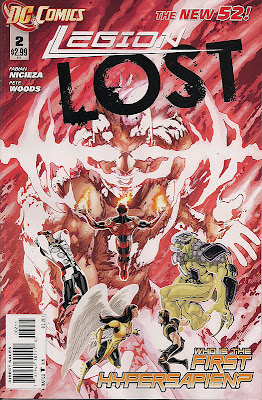 After pursuing a terrorist into the 21st century, a team of Legionnaires find themselves trapped. Their time bubble is destroyed, their flight rings have cut out, a pathogen has been released into the air ... and Chameleon Girl and Gates are missing, presumed dead,

You might forgive WIldfire, Dawnstar, Timber Wolf, Tyroc and Tellus were they to slope off and get drunk, but the only spirit on display here is Legion spirit. They have a job to do and while they're down, they're not out. So it is that as this second issue of the Legion of Super-Heroes spin-off opens, they're undercover at the memorial for the two dozen souls lost to the explosion caused by 31st-century madman Alastor.

They spot one of the supposed dead, Dr Jeffrey Scanlon, and he's a changed man. Infected by the virus scattered by Alastor, he's become an energy being similar to Wildfire, but with enough control to turn back into something resembling a human. Panicking, he releases a massive blast, catching the Legionnaires by surprise, and bolts. Dawnstar and Wildfire track Scanlon down, and the team explains what's happened to him. Alastor, grief stricken after the death of his sister at the hands of xenophobes, concocted a chillingly ironic plan for revenge. He stole a pathogen created by extraterrestrial scientists - a virus spiked with the DNA of thousands of races, meaning it will produce human/alien hybrids. Then he purloined a time bubble and headed for the past, with the intention of changing the course of human evolution, so that by his own era, his sister's murderers would be as alien as those they hate.

And so far, Alastor's succeeding. It's three days since the pathogen was released and Scanlon is the first victim. Most people would be freaked out, but he's weirdly calm, announcing that he'll no longer try to hold on to a human form. He manifests as a being of pure energy, and lets out another huge explosion. Fellow Legion members are saved by Tellus' telekinetic shield and they confront Scanlon, who despairingly claims that 'I stopped being human long before this happened'. He resists Widlfire's attempt to hold him together, lets go of his human shape and dissipates. Wildire sees this as just another failure on top of their 'letting' Alastor kill so many people last issue, and the Legion wonders what the heck's going to happen next.

Meanwhile, in a lake, something stirs ...

Another pathogen victim? Looking at the little hand reaching out, I'm hoping it's Gates. A teleporting alien has to be tough to kill.

But that's a matter for next issue. This issue, I loved. A much smoother ride than the debut, it could yet make a few new Legion fans. Fabian Nicieza's chapter this time is more focused than the previous part, with a pleasing throughline, a sympathetic antagonist and nicely defined heroes. Best served of all is Wildfire, who narrates the segment, giving us the action from his perspective while sharing opinions on his team-mates. It's an enjoyable framework, playing to Nicieza's knack for sharp characterisation, and I expect we'll see other members get their time in the narrative sun as the months pass. The real villain of the piece, Alastor, doesn't put in an appearance, but his plan makes him a constant presence .... it'd be interesting to see him narrate an issue too.

The dialogue's above average, with Timber Wolf more compelling than he's been for many a year (click on image to enlarge). 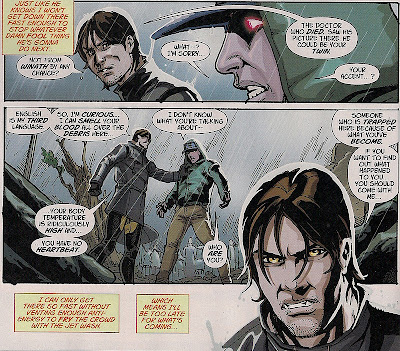 Other notable incidentals are the tying of this story to the Legion of Three Worlds arc via the xenophobes; the Legion's description of itself as 'a multi-species alliance'; and the mention of one of DC's nastier space races, the Psions. And I nearly fell off my chair when Nicieza referenced Wildfire's astrophysics background ... it's been so long I'd quite forgotten just how brainy he must be.

Artist Pete Woods likewise begins firing on all cylinders here, producing some great layouts and figurework. Nicieza's script is dramatic, and Woods amps it up further. While the splashy fights are excellent, my favourite panel is the opening spread, as sorrow and tension mingle at the packed memorial service. Like the rest of the book, this scene is gorgeously coloured by Brad Anderson, and smartly lettered by Travis Lanham.
I hope that anyone put off by Legion Lost #1 - and I read many an iffy review - sees this continuation; it's so much more together, so much more enjoyable. If the rest of the storyline is this good I won't mind Wildfire and co being stuck in our present for quite awhile.
Brad Anderson Fabian Nicieza Legion Lost #2 review Pete Woods Travis Lanham