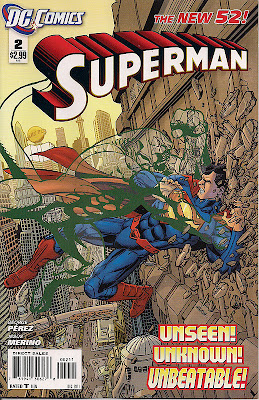 Superman is getting slapped about by a monster that's invisible to his senses, but a comment from Lois Lane tells him how to get into the fight. Defeated, the creature dissolves, but not without muttering one word in an unearthly language - 'Rosebud'.

Oh all right, it was 'Krypton', and yes, pretty much the same thing happened last month when a fire demon came to Metropolis. Obviously, they're connected, but two generic, basically silent monsters in two issues makes for pretty dull fight scenes. This is Superman, he should be battling baddies who can exchange banter as well as blows. The silent enemy provided the perfect excuse for writer George Perez to give us another internal narrative; last month it was a cringeworthy 'news story' by Clark Kent, this time it's Superman's thoughts.

But it's Superman's thoughts in the past tense, distancing us once more. We eventually find that he's dictating the encounter into a machine at the Fortress of Solitude, but the knowledge doesn't make the narrative device any more palatable. Twice Superman might as well cry 'Oh, the humanity!' as he frets about civilian casualties ... too, too melodramatic.

Away from the fight, the issue isn't bad at all. There's a tense, illuminating confrontation with General Sam Lane played out in a holographic 'Star Map' used to monitor Earth in relation to alien invasion. We see that as worried as he is that Superman's presence attracts danger to Metropolis, he's equally afraid that his daughter is too close to the hero.

The conversation motivates a flashback, of Clark helping Lois move into her new office. Lois wants him to know that her dating (I'm putting a polite sheen on the situation) the Jonathan guy we met last issue doesn't mean she's not Clark's friend. She hopes that her being out of the field, having been promoted to TV news producer, won't result in print journalist Clark's standards falling; in her mind, every good reporter needs another who's almost as good/slightly better to keep them on their toes. The logic is skewed, but I like Lois's confidence, which doesn't quite stray over into arrogance.

Clark himself lacks spark, assuring Lois that he's fine, but displaying no get up and go. I don't care that Lois doesn't think of him as a potential suitor because, well, why would she? There's no chemistry between them.

The monster Superman can't defeat (until he can) is right out of a Seventies Superman comic. Not literally - well, not that I can recall off the bat, but I'd be surprised if a similar story hadn't been previously told - but the gimmick battle is the sort of thing legendary editor Julius Schwartz would have loved. The idea is smart, though Superman comes across as pretty stupid in not immediately finding a vat of paint to throw over the beastie, giving him an outline to hit. The dictation implies that he had this thought at the time, but let's be generous and assume Superman is narrating strictly in hindsight.

George Perez is a great storyteller. The book is well-structured plot-wise and visually, and while I disagree with some characterrisation choices, he knows what's he's doing. The main thing he needs to make this book work is an editor to lighten up some of the dialogue: 'How ironic, then, that despite all of General Lane's apprehensions, this time it was his daughter Lois who saved me' - that's not dialogue, that's treacle. And Lois' final phone call to Clark is too soapy by half. So over to you, editor Wil Moss. 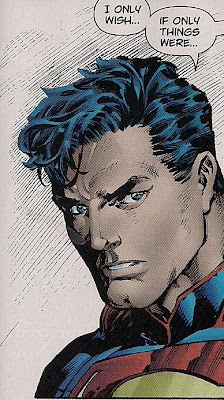 There are no problems with the art. Perez the writer gives Perez the draughtsman more room to breathe than last month, allowing illustrator Jesus Merino to show just how great he is with pencils and inks. Merino is the only artist so far to make the new Superman costume look good, while he conveys the moments of drama big and small with finesse. He sells the fight scenes, captures Lois' classic combination of brains and beauty, and makes Sam Lane something more than the overbearing father. Clark doesn't look bad at all, despite the 1930s specs and workwear inappropriate for a representative of the Great Metropolitan Newspaper - or doesn't he meet the public? And Jimmy Olsen, with his Justin Bieber makeover... 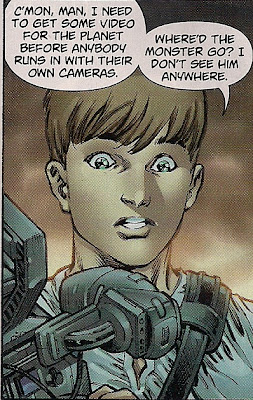 ... he still looks a proper twat. Come on DC, Jimmy's been a proud, freckled ginger for 70 years. Making him look like the pop cherub du jour obliterates the personality we know. Unless sales stats reveal a sudden influx of tasteless teenage girls buying this comic, change him back, eh?

And give Perry White a few pies.

Flash co-writer Brian Buccellato shows that he's still enthused by the day job with an exemplary colouring turn, and Carlos M Mangual's lettering is sharp. Buccellato also colours the Perez cover, which is marvellously busy without being over-cluttered. Well, apart from the super-fussy boots. (DC decides it's going to be tough with artists who don't hit deadlines, then redesigns costumes so they take three times as long to draw - good thinking!)

It's been announced that Perez is leaving this comic after six issues to do other projects. You can just bet that by then all the little problems will have gone away and this book will be firing on all cylinders. It's the law.
Brian Buccellato Carlos M Mangual DC New 52 George Perez Jesus Merino Superman #2 review Wil Moss