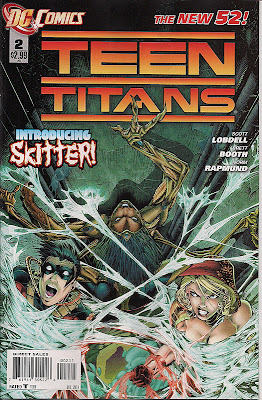 And at N.O.W.H.E.R.E. headquarters, newly born clone Superboy is readying for an attack on Wonder Girl. If the organisation can't persuade a super-teen to join them, they're quite prepared to erase them.

Things jog along nicely in this continuation of the story begun last month. Tim and Cassandra seem to bond some, before Little Miss 'Don't call me Wonder Girl' lets Red Robin know that she's really not a joiner. What she is, is a solo act, a thief - her Hollywood house is filled with stolen archaeological artefacts, explaining the 'war bracelets' she wears.

Kid Flash, we finally learn, is indeed Bart Allen rather than Wally West, and it's only his first day in the hero biz. But he's improving, after the little matter of causing a fire to rage out of control and getting himself captured.

New character Skitter - real name, Celine - is too icky for words, and a rubbish conversationalist, I say send her to N.O.W.H.E.R.E. and keep her non-powered twin Claudia around. But not until we learn who gave her the superhero jumpsuit.

There's a nice moment in Scott Lobdell's zippy script in which Tim bemoans the lurid jeans worn by Kids Today, but he seems totally fine with Cassie's ridiculously skimpy boob tube. She claims her decolletage is real but I suspect it was stolen too, from Power Girl - Cassie truly puts the 'tit' in 'Titans'. I really hope artist Brett Boobs - sorry, Booth, tones them down (though they do seem to be keeping Cassie from drowning on that cover).

Breasts aside, Booth and inker Norm Rapmund are doing a decent job here; their art style suits Lobdell's energetic narrative. Booth has some fun with the understated Hallowe'en setting ... 'Fatgirl' alone is worth the price of admission. This issue's new supervillains - teleporting brothers who share a body (or something) - aren't. I likewise wasn't pleased to see Red Robin happily slashing one of these guys with his razor-tipped cape. Not cool. 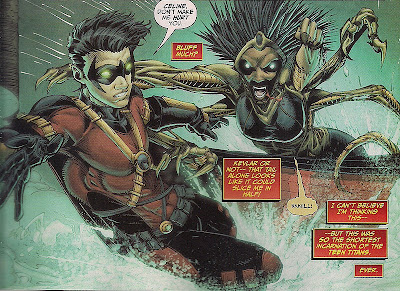 Oh, and I wish DC had decided beforehand whether or not Teen Titans groups have previously existed. Last week DC was publicly saying no, here Tim makes it clear that Titans have clashed with villains plenty of times (click on image to enlarge). The uncertainty is distracting.

Still, overall this is intriguing and entertaining enough to earn my two quid. It may not be my Teen Titans - they died along with Lilith - but it's a group with potential. And we haven't even met all the members yet, with Solstice due a proper introduction next month, and Blockade arriving on the scene. I look forward to it.
Brett Booth DC New 52 Norm Rapmund Scott Lobdell Teen Titans #2 review