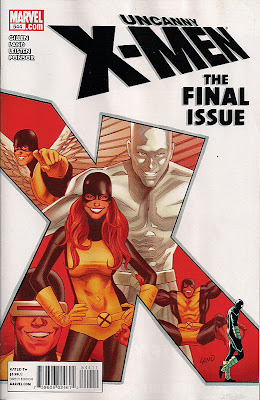 It's the last-ever issue of Uncanny X-Men. Until next month's Uncanny X-Men #1, that is. Still, let's pretend it's the end, it's the least writer Kieron Gillen deserves for the effort he's putting in here.

The book opens with a version of the first-ever page featuring the X-Men, and it's sheer delight (click on image to enlarge). 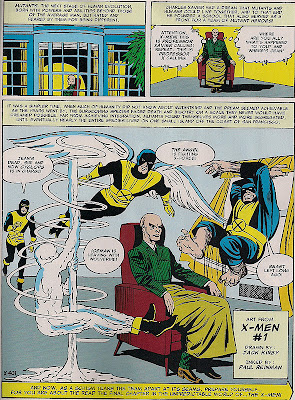 The rest of the book would have to go some to match up to such wit, but Gillen and his artistic partners almost manage it. The framework for 'Uncanny' is that nasty old Mr Sinister is watching recent events from afar. He's reading about the Schism that's split the mutant community, in a storybook entitled 'The Uncanny X-Men' - what else? Times are changing for the X-Men, and he's making some changes of his own by moving into a new body.

While Mr Sinister becomes a new man, in the 'real world' Iceman says his goodbyes to Cyclops before heading for Westchester County and Wolverine's planned school for gifted youngsters. Bobby is trying to be perky, Scott stoic, but the true emotions show throw - Iceman is devastated, Cyclops is bitter. The Beast, one of the few other original X-Men and another hero throwing his hat in with Wolverine, arrives not so much to revel in Cyclops' pain, but to hope he pays attention to it and remembers Xavier's dream. But the only reaction Hank gets is anger. Emma Frost tries to be there for her lover, but Cyclops is surly. He's so lost that he actually believes he can hide his feelings from a telepath the way he hides his face behind his visor throughout this issue.

While I'm no fan of Mr Sinister - he has a stupid name, talks out loud to himself and his role as master manipulator of mutantkind rather rankles - there's a priceless moment as he stares at the Summers/Grey family tree, as if looking at it for long enough will make it see sense. 'Cosmic-scale-evolution-with-metaphysical-transferred-quasi-genetic-information?' indeed!

While penciller Greg Land seemingly continues his practice of painting superhero costumes on pouting models, resulting in facial expressions that don't match the art, there are some good moments here. Give the man a splash to do, and he's in heaven - a two-page spread of X-Men history is a corker: likely someone will give chapter and verse of the visual references used, but I'll still like it. Land is well served by inker Jay Leisten and colourist Justin Ponsor.

Gillen's dialogue is among the best the X-Men have had, with tons of great character moments, both individually and collectively. The only niggle I have concerns the whereabouts of the only other surviving original X-Man, Angel. Podcasts tell me he's gone dark and eeeeevil in X-Force. There is a tiny reference on page one, but as one of the five characters who started it all - as Iceman puts it, 'We were the Beatles' - he deserves to be a proper part of the (pretendy) final issue.

Artwise, the only real storytelling problem is that Mr Sinister's new body looks exactly like the old body. I'd assume the form he starts out with here is meant to be worn out, but he looks identical to the next guy who pops out of some scientific doodad. Maybe I need to read up on the chap.