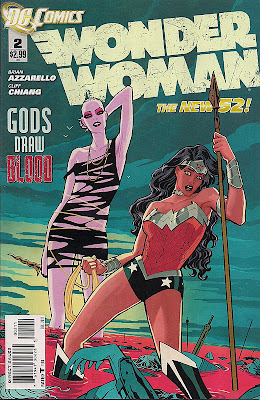 The deranged fashion model type is Strife, an Olympian dedicated to discord. She shows up on Paradise Island and strikes at the Amazons, who are harbouring the mortal Zola, latest in a long line of human women to be impregnated by Zeus, King of the Gods. Zola has been brought there by Diana, Princess of the Amazons and known to the outside world as Wonder Woman. Hoping for a breather while she decides how to further protect Zola after the godly attacks of last issue, Diana relaxes among her people with a spot of martial combat. But once Strife arrives, the danger is all too real.

The first thing that excited me about this issue was the introduction of Hippolyta, Queen of the Amazons and as blonde and beautiful as the version I grew up with. She's a powerful presence: wise, and wary at the trouble she knows is coming as the result of Diana's actions. But like her daughter, she's compassionate, and isn't going to turn away a woman in trouble.

We see a little more of Zola's character, as the wounded god Hermes, ally of the Amazons, asks her what form Zeus came to her in. And Hermes reveals the circumstances of Diana's birth, something he refers to as a legend. Sculpted from clay, brought to magical life - you know the story.

'Story' being the operative word, apparently - Strife tells Diana at the end of this issue that they're sisters, both daughters of Zeus. She could be lying, but given that DC Comics has already spoiled this revelation in the Press, I'd say not. Soon we'll learn whether or not Zeus is Diana's father in the sense that he, rather than the females of Olympus, gifted her with life or whether Hippolyta and Zeus were intimate.

The foreknowledge means the power of Strife's news is lost to me, but that's not the fault of this comic's creators. Writer Brian Azzarello and artist Cliff Chiang are in perfect communion here, producing a story that reads and looks, well, wonderful. Diana is strong and likeable, while Hippolyta is the mother she deserves. Diana gives due respect to Hippolyta as mother and monarch, but it's clear they're friends first and foremost. Chiang grants his characters the emotions requested by Azzarello's script: as well as Diana's joy in sparring and guts in battle, there's Strife's manipulation of her mother Hera; the cuckolded Hera's anger at Zeus; Hippolyta's trepidation; Hermes' weariness at godly games ... it's page after page of glorious comics, made all the more beautiful by the colour art of Matthew Wilson. Every page is a gem but the birth of Diana and combat with the Amazon Alekka cry out for special mention. Along with this panel. 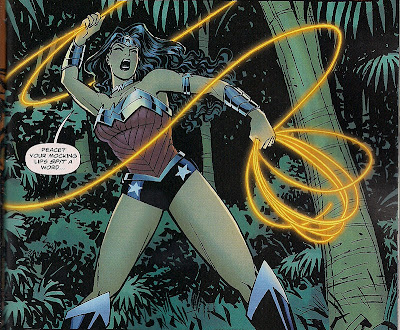 Alekka is the image of Artemis, from the last continuity, while Hippolyta's chum Dessa is reminiscent of Philippus - I wonder if this is another case of the new creative team using the same character types, while renaming them so as to seem All-New (see John Byrne's run). A case could easily be made that Strife is the new version of Eris, but it's all just fun speculation. The main thing is that this is a superb new presentation of Wonder Woman. Details are different, but the character and her world are recognisable. The few qualms I had last time - Wonder Woman's closet of spikey weapons! - are eased as we see Diana, taking up Alekka's challenge of a bout, favour a staff over a sword. This is no bloodthirsty warrior, it's a hero who'll take up the sword only if the battle demands it. And that's my Wonder Woman.
Blackest Night: Wonder Woman #2 review Brian Azzarello Cliff Chiang Matthew Wilson