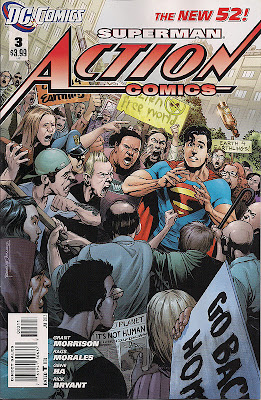 Three months into the Superman relaunch and we get our first look at Krypton, as Jor-El warns Lara to get out of Kandor just in time for her to see it stolen by, presumably, Brainiac. A quarter of a century later, on Earth, Clark Kent dreams of the catastrophe, witnessed by him as a babe-in-arms. A rude awakening sees his flat raided by Metropolis police - rattled by Clark's anti-corruption exposes - and someone disovering his makeshift super suit.

Later, Lois Lane tries to persuade Daily Star reporter Clark to join the Daily Planet, which is owned by Superman's least-favourite businessman, Glen Glenmorgan. And Lex Luthor's transformation of military man John Corben into an anti-alien super-soldier is interrupted by the incursion of an alien hive mind - Brainiac has reached Earth..

This issue reads rather choppily, with no obvious focus, but Grant Morrison's zippy script nevertheless carries us along. I'm not delighted to see the revised origin of Metallo/Corben, and the shrinking of Kandor again so soon given they were dealt with in depth in the old DC continuity, not so long ago. Still, new readers start here, and all that. 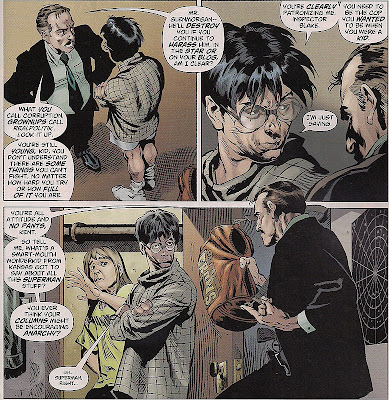 What I really don't like about this issue is Rags Morales and Rick Bryant's depiction of Clark Kent (click on images to enlarge). I get that he's less powerful at this 'five years ago' point in his heroic career, so picks up bruises, but with his hair super-tousled and the bruises looking like dirt, the man could pass for a tramp. And an ugly one, at that. Other than that, the artists' work serves the modern day sequences well, with Metropolis a bustling hulk of a town and its inhabitants characterful enough to survive it.

The Krypton flashback is simply gorgeous, with Jor-El, Lara and their family looking like sparkling gods, and the removal of Kandor awe-inspiring. Kal-El has never looked more like a 'star-child' than in the opening panel. Art Lyon's colours sizzle in this sequence, while Brad Anderson does a great job with the Earthbound scenes.

Finally, I'd like to drop Krypto's fluffy canine corpse >choke< on whichever DC bean counter decided to charge us $3.99 for just 20 pages of strip. Eight pages of advertorial about the new Superman books? I'll buy that for a dollar - because I have no choice. It's a Marvel-style rip-off and no mistake.
Action Comics #3 review Art Lyon Batman and Robin #6 review Grant Morrison Brad Anderson DC New 52 Gene Ha Rags Morales Rick Bryant Superman
Location: Edinburgh, City of Edinburgh, UK