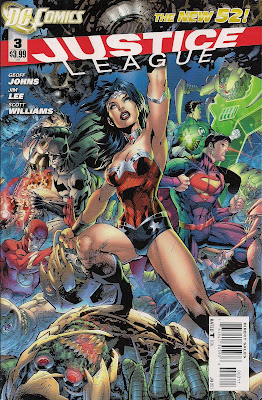 Wonder Woman joins Superman, Batman, Flash and Green Lantern as winged beasts wreak havoc in Metropolis, destroying property and kidnapping citizens. Meanwhile in Detroit, another attack by the aliens sees STAR Labs scientist Professor Ivo carried away as colleague Silas Stone bids to save son Victor from succumbing to burns received as the monsters arrived in a tunnel of energy. Filled with advanced nanobots, Victor's mind links to that of the massive creature rising from the Metropolis ocean. And another hero enters the fray ...

I think it's fair to say this book is firing on all cylinders now, delivering a solid mix of story advancement, characterisation and action. The introduction of Wonder Woman in this five-years-ago serial shows us that she's new to the United States and being babysat by the military. Leaving via the wall is apparently her way of reminding her minders that she's not their prisoner. There is one minder whom Diana doesn't seem to mind, though - liaison Steve Trevor. He follows her onto the streets of Washington DC as she searches for a winged creature news reports say is assaulting citizens, and frets needlessly about her safety.

Diana's interaction with a little girl and a street vendor are delightful, demonstrating that while she's fierce when there's a monster to be stopped, she's all about enjoying life. And her introduction to her future League colleagues, and their reaction to her, hits some entertaining notes.

The heroes don't yet know they're facing para-demons from Apokolips, and that the thing rising from Hobbs Bay is Darkseid, but they do know they're up against an evil too powerful for a single hero.

Geoff Johns jollies the story along nicely with a well-paced narrative, and offers some gems of dialogue ('Has anyone seen a harpy?') while penciler Jim Lee and inker Scott Williams produce their best artwork yet on this series. The pages blaze with incident without looking cluttered and the struggle between heroes and villains makes for an entertaining ride. We see the power of Superman, GL's concentration issues, Flash's multi-tasking and Batman's ability to hold his own without powers. There are a few splashes and spreads, all used well in the pursuit of impact.

The only thing I'm not happy about is Diana slicing and dicing with an (apparently extendable) sword. It's been said many times, but she's not Xena, Warrior Princess. The creators of Xena copied her - she's Wonder Woman, and the only weapon she needs to defeat any opponent is her magic lasso. Yes, it restrains, but it can certainly lash a beastie if necessary, and can put a foe down without killing them. You know, like a hero should. Using a sword makes Diana look less impressive, not more.

It's interesting to finally see how the new costume designed by Lee for Wonder Woman works when he draws it; I'd not previously noticed that the tiny chest eagle head is part of a star design, which is clever, but if there's one thing this outfit doesn't need, it's more stars. Sure, Diana has far fewer on her shorts than in previous times, but they've migrated to her bustier, a choker, an armband ... and there are so many jagged edges it seems Wonder Woman likes a bit of pain as she moves. But then, Lee really does go for bits of costuming that get in the way of free movement, such as Superman's long sleeves that cover the back of his hands, and his and Green Lantern's high mandarin collars that would give any normal person a crick in the neck. Fussy fussy fussy.

Still, I can stand a bit of bad superhero fashion if the comic is good, and it's not like it'll last. Meanwhile, you won't find a bigger, noisier superhero story for your $2.99 (US) this week.

Sadly, this book is $3.99, and after the 22 pages of fun we have another look at Jim Lee's sketchbook, showing us how he's made GL's costume needlessly complicated with all kinds of noodling that will be ignored by other pencillers, inkers and colourists the minute his back's turned.

Worse, we have a five-page 'extract' from an in-universe book, The Secret History of Atlantis, by one David Graves. Sounds interesting? It isn't. This is pure Amazon.com 'Look Inside' space-wasting, with a bare cover, library card page, About the Author, dedication and foreword. Don't waste your time looking for interest, here's the meat: 'Atlantis may exist'. Oh, and Sea Devils leader Dane Dorrance is mentioned, whoop-de-doo.