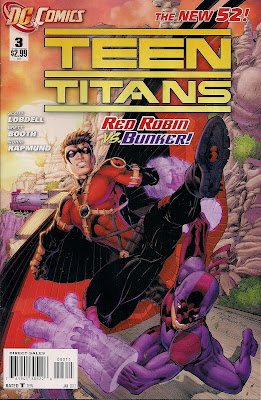 Kid Flash breaks out of the N.O.W.H.E.R.E. facility, taking another prisoner, Solstice, with him. Wonder Girl dresses up as a nurse to get information out of one of the brothers who comprise the villainous Thrice. And Red Robin, travelling cross country by train with teen insect queen Skitter, meets another new hero, Bunker.

Ah yes, Bunker. Advance DC publicity tells us he's gay, and I was dreading the arrival of The Gay Titan, complete with stereotyping and/or agenda baggage. Happily, as presented by writer Scott Lobdell and artists Brett Booth and Norm Rapmund, so far he's just a character who happens to be gay. I don't think the G-word is even mentioned this issue. He's gay all right, but it's in the original sense of the word - Miguel Jose Barragan is a sunny fella, open, funny and great company. He's a splendid foil for the oh-so-serious Red Robin, and I can see these two becoming big buddies.

He also has psionic powers that are going to be very useful when he learns to apply them properly. Think purple Teen Lantern and you're pretty much there. He can build bricks with lavender (ahem) energy, using them as a battering ram, to reinforce a fist, that sort of thing. Now if he can just find a decent name ... Bunker, Lord, it's as bad as Skitter ('Why would someone call herself ...' begins Bunker, Bibilical physician). And the costume colouring, red and purple, isn't attractive.

Another future Titan who's been having problems using his powers as smartly as possible is Kid Flash - in the debut issue he made a blaze situation worse with his grandstanding. Here, though, he gets a standout scene, combining super-speed and the knowledge that's allowed him to glean to rescue Solstice. In an eye-catching spread, Booth and Rapmund show multiple Barts zipping around the N.O.W.H.E.R.E. prison while numbers and a red through-line guide us through the action. Booth's storytelling is good enough that we'd be able to follow even without the graphics, but their addition makes for a distinctive opening to the issue. It's followed by an amusing moment in which Bart realises that boots built for traction are a speedster's best friend.

Other fun scenes include Red Robin's encounter with new villain Detritus - a grubbier version of old JLA baddie The Construct - and its aftermath; Solstice learning a little of what she can do; and Wonder Girl having a great time with a spot of play acting. Lobdell finds a pleasing balance between wittiness and smart-arse self-awareness, best evidenced in the opening exchange between Red Robin and Detritus.

It's all energetically presented by Booth and Rapmund, with plenty of big moments. The story is brightly coloured by Andrew Dalhouse, and Dezi Sienty's lettering puts the script across clearly. The cover, by Booth, Rapmund and Dalhouse could showcase Bunker a little more effectively - Red Robin dominates - but it's not half-bad.


Three issues in and this series is gelling nicely, with likeable, distinctive characters coming together for a very good reason - to protect themselves from outside forces. I don't know whether this is meant to be a metaphor for young people growing up in a scary world they never made ... I do know that this is a thoroughly entertaining super-hero comic. And next issue the Teen Titans unite for the first time - if the quality continues to improve, it'll be well worth checking out.
Andrew Dalhouse Bunker DC New 52 Dezi Sienty Norm Rapmund Scott Lobdell Teen Titans #3 review Wonder Girl