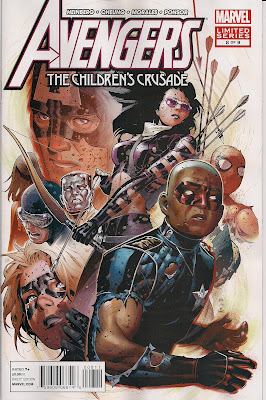 Dr Doom has the power of a god and he intends to rule all ... benignly. 'I shall make ours a planet free of poverty, disease and war.' Former mutants will have their abilities returned, dead heroes will be restored. He doesn't ask that the world's peoples bow before him, just that they accept his rule once they see him making amends for his sins.

Doesn't sound a bad deal? The Young Avengers aren't so sure. 'A benevolent dictator is still a dictator,' points out Hawkeye-Kate. And onetime Avenger the Scarlet Witch - her sense of self returned after years in the mental wilderness - fears he'll be corrupted by such massive reality-altering power, as she was before he took it from her. She offers to fulfil his wish that she marry him ... if he gives up the magic. But he zaps the heroes from Latveria back to New York as he's having none of it.

And X-Man Emma Frost isn't having the Scarlet Witch, believed to have destroyed much of the mutant 'race', roaming free. She uses her mental power to shut Wanda down, instigating a conversation between Avengers old and Young, X-Men and X-Factor on the subject of forgiveness. Cyclops, leader of the X-Men, says he wishes to bring Wanda to 'justice', though he's not too clear on what exactly that would mean. Her son Wiccan responds by demonstrating an ability rarely seen in Cyclops' world: logic (click on image to enlarge). 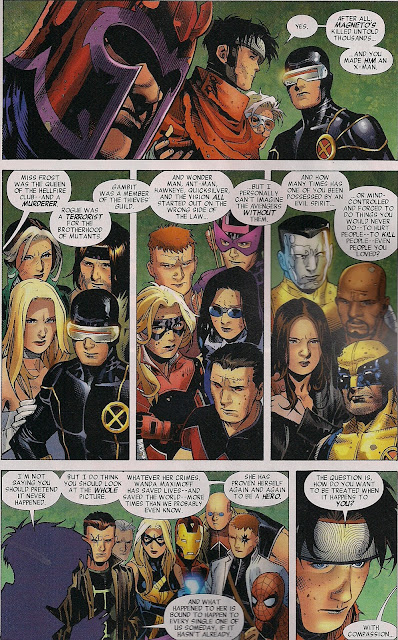 Cyclops' reaction isn't recorded, sadly, as the all-new, all-different Victor Von Doom appears, offering miracles in exchange for fealty. Cue fight scene, cue the apparent death of two heroes and likely death of one. More interesting, though, is a revelation - or at least a claim - that cuts to the very core of the supposed Wanda problem, one which pulls the rug out of the horrible story that was Avengers Disassembled. I daresay we'll learn the truth of the matter next time, when this nine-issue, 15-year series concludes.

Yeah, I'm having another wee pop at the (in)frequency of this book, but it's a compliment: this really is a cracking series, with talented creators telling an important story in a tremendously entertaining manner. Writer Allan Heinberg's character work with not just his Young Avengers cast, but every last hero and villain in here, is just stellar, playing to their classic selves while throwing a few surprises our way. That scene above, for example, popping Cyclops' bubble of self-delusion, is one that demanded to be played out, but I never thought it would happen.

And the artwork of penciller Jim Cheung, inkers Mark Morales, John Livesay and that man Cheung again, is stellar - their messianic Doom is especially appealing. There are no spidery eyebrows for this guy; mask-less and clad in angelic white tunic he really does radiate benevolence. Credit, too, to colourists Justin Ponsor and Paul Mounts and letterer Cory Petit.

Next issue's finale promises to be a feast of action and personality, pushing the Marvel Universe into its next phase and the Avengers vs X-Men series. I'm not especially excited about the coming crossover, but Avengers: The Children's Crusade looks set to be a favourite for a long time to come.
Allan Heinberg Avengers Avengers: The Children's Crusade #8 review Cory Petit Jim Cheung John Livesay Justin Ponsor Mark Morales X-Factor X-Men