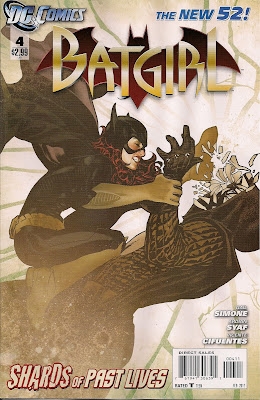 "Oh Barbara, get over it. Really, it's beyond tiresome. An assault put you in a wheelchair, but you've had a miracle cure. Stop whining about it. Sure, there are still thousands of wheelchair users in the world, but you're not betraying them by regaining the use of your legs - you never asked to be poster girl for differently abled vigilantes."

What's that? Why am I talking to a fictional character? Because Barbara Gordon is trying to shake off her fictional chains, she's been infected with metatextual dreams. When DC announced that the New 52 revamp was ending her tenure as Oracle, allowing her to run across the Gotham rooftops again in bat-tights, there was uproar in some quarters of fandom. Supposedly DC was betraying wheelchair-using readers by robbing them of a hero they could identify with.

Which I can see - Oracle occupied a powerful position in the area of superhero diversity, showing that a person didn't need to be a super-athlete to be a winner. Decades of Barbara as Oracle demonstrated that, in or out of a chair, she's a hero.

I was a Batgirl fan long before she became Oracle, so relished seeing her find a new way to fight for justice while refusing to be a victim. But now, decisions at a corporate level mean Barbara is back in the role in which she's best-known to the non-comics reading public, back in the cape and cowl. DC has made its decision, and if I want to continue to follow Barbara as a character, I have to move on. Move forward.

I just wish she would. Here we are in the fourth issue of this book and still we're bogged down by the past. Writer Gail Simone's disinclination to just tell us how the heck Barbara was cured hangs heavy over the book, with little teases here and there but no real information. This issue we learn that a South African clinic was involved, leading me to think that, oh, by #20 we'll know the full story.

Meanwhile, Barbara is having her own version of survivor's guilt, a dream version of her chastising her for embracing a cure (click on image to enlarge). 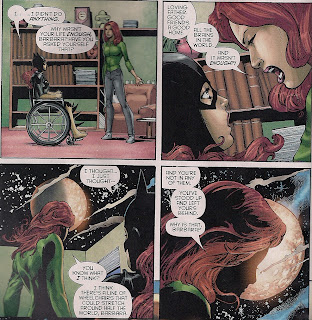 It's an embarrassing scene, addressing the fans who feel DC is letting them down with all the subtlety of a brick. But they've had their say, and aired some interesting points. Newsarama, for one, printed an interesting conversation about the subject between Simone and wheelchair-using blogger Jill Pantozzi. All DC owes any of us readers for our US $2.99 is entertainment, and having decided to let Barbara walk, they should have - pardon me - ran with it. Established Barbara as the Batgirl of choice by having her fight her way into the future rather than have her full of angst about the past.

The guilt surrounding the miracle cure also clings to the villain of the piece, The Mirror, a man murdering people who 'miraculously' survive tragedies which kill others. He has his own logic, but it's stupid and I'm glad to see Barbara defeat him with her brains this issue. This is where Barbara impresses, not worrying about her responsibility to the wheelchair community, or fretting that she's going to damage her spine again. An assertive Batgirl who embraces life is what fans want, that's why predecessor Stephanie Brown was popular. A Batgirl throwing angst-arangs is simply a turn-off.

Barbara's also a downer when it comes to her new flatmate, Alysia, a wee firecracker who's shown she could be a good friend. She's worrying about giving too much away, opening up. Which is fine, I can see a superheroine not wanting to drag a pal into her dangerous life, but it's not like Barbara has no options - live with super-powered pals, or live alone. Just don't mess people about.

The best scene of the issue has Batgirl rescuing a couple from street robbers who may or may not be linked to Hugo Strange - she's feisty, she's funny and Simone tops the incident with a good, believable gag. The story is nicely structured and there's also a splendidly soapy surprise ending.

Penciller Ardian Syaf and inker Vicente Cifuentes produce beautiful art, featuring a tough, attractive Batgirl. The opening splash, moodily coloured by Ulises Arreola, may irk me with its subject matter - miserable Batgirl in a wheelchair - but it's sharply rendered and sets the tone for the rest of the book. What's more, the letters of Dave Sharpe are excellent and Adam Hughes offers another striking cover - literally.

This is so close to being a great super-hero book, but it needs to stop trying to appease detractors with 'I feel your pain' winks, and win them over with original storylines, compelling characters and dynamic artwork. Let Barbara move on, and maybe we'll all follow her.
Adam Hughes Ardian Syaf Batgirl #4 review DC New 52 Dave Sharpe Gail Simone Ulises Arreola Vicente Sifuentes