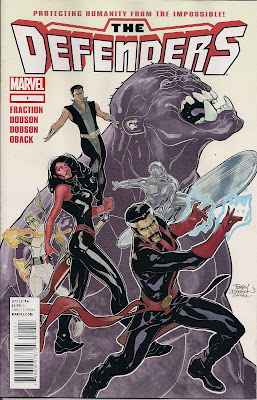 The Hulk asks old pals Dr Strange, Silver Surfer and Namor to seek out and destroy Nul, Breaker of Worlds - a kind of Black Hulk. Bruce Banner himself daren't go near the beast for fear of merging with it, but points them towards a Hulk who can get involved - his occasional wife, Betty Ross, the red She-Hulk. On a quest to avoid boredom, she's only too happy to come along, so long as she can bring her 'big-ass swords'. The team is rounded off by Iron Fist, needed not for his mastery of martial arts so much as his ruddy great jet ... it seems Dr Strange's teleportational abilities aren't what they were.

So it's off to Wundagore Mountain, Nul's projected destination, and scene of the issue's explosive conclusion.

How big a threat Nul is, I can't tell you, having bailed out of the Fear Itself crossover in which he debuted. Writer Matt Fraction, happily, doesn't demand prior knowledge, showing Nul to be big and dangerous, and linked to all manner of weirdness in Bucharest. While Nul likely has a part to play in this series' opening storyline, this first issue is more interested in sketching in the lead characters. By the end we've seen that Strange loves a mystery, Surfer is a mystery, Namor is imperious, She-Hulk wrecks and Iron Fist just wants to read comics. I can relate to at least one of these positions.

Speaking of positions, both Iron Fist and Dr Strange are shown post-shag (no, not with one another ...) but given that neither encounter is presented as particularly fulfilling (that may be on-off partner Misty Knight in Iron Fist's bed, her bionic arm miscoloured) I won't assume Fraction was trying to make the heroes look cool. And if the Seventies-style bottom-of-the-page teases ...

The core Defenders wound up as comics' original non-team because they didn't play well with others, but here Strange, Surfer, Namor and Hulk show that over the years they've become brothers (even the little matter of having been banished a few times by Strange doesn't deter Hulk from asking his help). It makes sense that they'd seek out one another. Iron Fist's presence is less convincing ... if the Defenders need a playboy with a jet, why not try a Defender they've all worked with dozens of times, Nighthawk? And what's Red She-Hulk got that tried and tested Green She-Hulk Jennifer Walters - Bruce Banner's cousin - hasn't?

Oh well, it's Matt Fraction's party and he can write who he wants to. Both Iron Fist and She-Hulk are likeable here, and admittedly, they freshen up the old mix. Plus, Betty acts as a viewpoint character for newer readers. But should Fraction suddenly have an itch to bring in Nighthawk, Hellcat or Valkyrie, dump them both!

Not overtly referencing Fear Itself makes sense, given how few people seem to have liked - as opposed to bought - the crossover. I'm OK with Nul as the maguffin that sees the team get back together, ahead of the big things Marvel publicity promises for this title. Supposedly, it's going to knit together disparate strands of comic book history into a Unified Theory of Marvel. That promise will have me coming back for a few issues.

Otherwise, I'd drop this comic right now. It's thoroughly competent - Fraction's handling of the characters is engaging, while Terry and Rachel Dodson produce their dependably strong, pretty art - but it feels like a generic Marvel book. There's Namor, currently with the X-Men and just seen with the Thunderbolts. One of three - or is it four? - female Hulks. The always boring Silver Surfer. And Dr Strange and Iron Fist, who are already on a team together, the Avengers.

Speaking of whom, a plot point has it that the Defenders can't tell the Avengers about their mission; how does that work when they are Avengers?

My favourite moments this issue see Strange divining on the cheap, and Iron Fist having the most token, gotta-get-an-action-scene-in skirmish ever.

Going  back to the art, Dr Strange has a new look, which is a lot like most of his old looks sans the most interesting, recognisable element - the Cloak of Levitation. Heaven knows where that is (did Brother Voodoo get it?), but I hope it shows up soon. It's not a trifling detail, it's iconic. And while I'm making sartorial requests, could Iron Fist please have his classic green suit and yellow slippers back? The white boilersuit makes him look like a refugee from Flashdance.

The colouring is handled by Sonia Oback, and her bright palette meshes well with the Dodsons' page designs. There's a technical hitch with the Surfer's narrative boxes, making them very tough to read, but it turns out that as ever, he's just wittering on about his search for meaning and self.

I'm not sure if letterer Clayton Cowles dug out the retro mini-logos, but like the page teasers, they're a nice touch that puts this book in touch with the Defenders' heyday.

At $3.99 for 20pp of story and art, this is hardly a bargain, but it's solid work from good creators. I hear things kick up a gear next month as Fraction and the Dodsons get used to working Marvel-style. I'll check it out, but meanwhile, I'd say this issue is skippable.
Clayton Cowles Defenders #1 review. Matt Fraction Sonia Oback Terry and Rachel Dodson