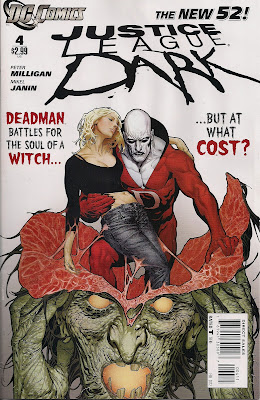 Good Lord, this is dark stuff. Of course, the clue's in the title, but I've rarely seen a non-'mature' book play with such disturbing imagery. Scalping, killer kids, women losing their heads ...

The opening serial of this DC New 52 series sees a bunch of supernatural players - 'heroes' might be overstating it, in some cases - out to stop the menace of the Enchantress. The sometimes hero/sometimes villain has lost her host, June Moone, and all hell is breaking loose across the DC Universe. The superheroes have retreated, hoping the likes of Deadman and Zatanna can save the day. Also involved are Shade the Changing Man, John Constantine, Madame Xanadu and a character first seen in the Flashpoint event of last summer, Mindwarp. One of these characters, it turns out this time, may actually be to blame for the Enchantress problem. All of them are feeling a bit out of their depth - but unlike the squeaky clean likes of Superman and Green Lantern, they're not giving up.

It's all rather inspirational, in a twisted way. Writer Peter Milligan keeps the plot bubbling like a witch's cauldron while spotlighting the personalities involved. There are a couple of missteps: portraying veteran mystic Madame Xanadu as engaging a drug dealer to help her cope with visions - to my mind, that's not something someone in the position of hero should be doing; and showing Constantine slapping Xanadu rather than giving her a chance to explain something - OK, I know these are intense people, heroes are always fighting, and she bashes him back, but the scene left a nasty taste. A more minor irritation is the Mindwarp fella; I can't get a handle on his character or powers, while he manages to annoy with every appearance.

The artwork is out and out stunning, with Mikel Janin letting his imagination run riot as he interprets Milligan's literate script. All the old characters are nicely on model - well, apart from poor old Enchantress - while the new nightmares grab the eyes. And the colours of Ulises Arreola are just beautiful, even when illuminating horrific moments.