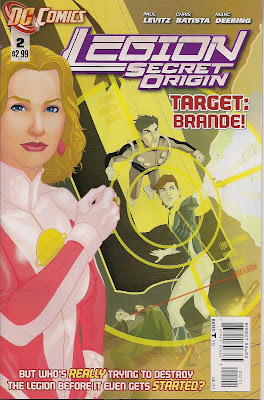 Assassination attempts - you wait forever for one, then three come along at once ...

Someone really doesn't like RJ Brande. He's only just getting over one attempt on his life when two more come. Once again, though, the billionaire industrialist is protected by Saturn Girl, Lightning Lad and Cosmic Boy, who he's decided to organise as a Legion of Super-Heroes. Also throwing herself between Brande and danger is Triplicate Girl, another recruit. When things calm down again, Brande tells aides Pheebs and Marla Latham to find more potential members, to provide his proteges with back-up.

Meanwhile, across the universe on the world of Anotrom, new acquaintances Brainiac 5 and Phantom Girl face an attack of their own, from someone with forcefield technology similar to Brainy's.

Watching this last assault is Admiral Allon of the United Planets fleet, but he's interrupted by son Gim, who indicates that he's wanting to hook up with this new Legion. So much for the Science Police career ...

Also monitoring/spying on the young heroes are the three members of the UP Security Directorate, tasked with helping worlds ease back into a position of peace after something known as 'the Sundering'. Two of them, Anisa and Zarl, see great things ahead for the Legion. The third, Mycroft, views the Legion as 'an accidental army' which he, rather then Brande, should control.

The mysteries continue in this second issue of DC's most detailed look yet at the origin of the Legion. What was the Sundering? Who's behind the attacks? What dark future is Naltorian prophet Anisa seeing for the Legion? Zarl points out that the weaponry used against Brande seems to be of human design, being 'almost anachronistically simple', while the tech employed on Anotrom is 'totally alien'.

Technology spanning time and space? I wonder if traditional Legion foe the Time Trapper is involved? Hopefully someone splashy will show up soon, because an in-depth origin piece cannot live by detail alone. I'm enjoying the new information on, for example. Phantom Girl's abilities, but a compelling threat is needed, preferably one with a strong visual. A redesigned Time Trapper could be just the thing (those purple robes are just so last Inquisition).

Then again, if Brande is as manipulative as Mycroft asserts, it could be that he's the one setting up threats against himself.

Mycroft emerges from Paul Levitz's script as the most interesting character here, followed by Phantom Girl and Brainiac 5. The rest of the Legionnaires barely have two characteristics to rub together. And while that's exactly how they were presented in their earliest Silver Age appearances, that doesn't cut it today. Hopefully Levitz will soon show us just who these idealistic heroes are. He obviously has the story all worked out, we just need a few cherries on top. 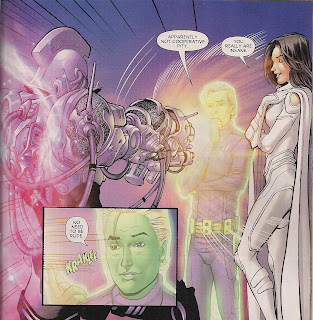 The artwork of Chris Batista and Marc Deering continues to be attractive, really coming to life in the action sequences. And there's a tremendous variety of well-rendered sound effects here, which may be to the credit of letterer Dezi Sienty. Whoever it is, well done - I love a bit of sound and fury. Wes Hartman colours, keeping things bright for the new team, and suitably dim for the shadowy Security Directorate. This is a great artistic team, and hopefully they'll be given something to really stretch them soon. Finally, Tom Feister's cover is a beaut, really, just look at it.