Red Hood and the Outlaws #4 review 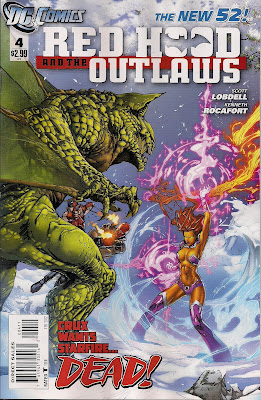 Continuing his quest to find the killers of the All-Caste, eastern martial artists who trained him after he quit as Robin, Red Hood Jason Todd turns up in a Colorado bar. Wingman Roy Harper, aka Arsenal, leaves Jason to it when he instigates a fight, apparently due to his liking for the ladies. As it happens, he began the fracas so he'd get the attention of the local sheriff, who turns out to be one of the Untitled. They're the ancient, inhuman race believed to have gone against a peace treaty and slaughtered the All-Caste. She denies involvement, and is on the verge of eating Jason's liver when Roy arrives with some especially useful shafts.
Meanwhile, Kory is floating above a local church, knowing she wouldn't blend into the saloon too well. Her peaceful reverie is shattered when she's attacked by a monster with a grudge against her race. The son of scientists killed when they ran into a Tamaranean spacecraft outside Edinburgh (the Tamaranean taste for deep-fried Mars Bars is awfully under-publicised), Simon Amal has dedicated his life to learning about the aliens who inadvertently took his parents' lives. And transformed himself into a horrifying cross between Man-Bat and Killer Croc - Crux.

Crux isn't strong enough to take Starfire. He is wily enough to lead her into a trap which leaves her, it seems, without her energy blasts. The issue closes on Jason facing the disfigured, and thoroughly peeved, Untitled sheriff.

And that's another fine comic from writer Scott Lobdell and artist Kenneth Rocafort. They manage to progress the Untitled storyline while finding room for a Starfire-focused strand, providing new opportunities for character layering. The flighty Kory of the first issue is long behind us as Crux, doing the old villain bit of trying to bore the hero to death with backstory, feels the full force of her no-nonsense attitude. 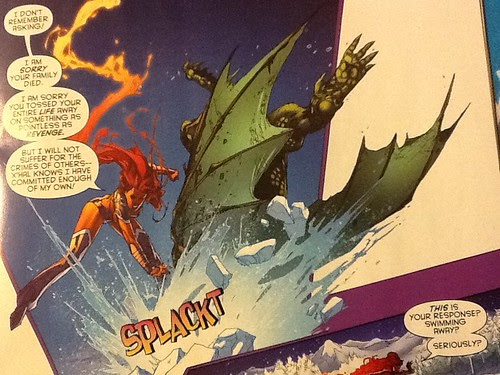 Along the way, Lobdell lets us know a little more about our heroes in this post-Flashpoint DC Universe: Jason was Robin for two years, Roy is a recovering alcoholic and Kory sees herself as 'a princess ... captivated by these two court jesters'. Roy says of Jason, 'His whole life is about trying to bring order ... to make things right.' And beyond the information we have three very likeable characters bonded by belief and chemistry.

Rocafort's artwork looks better every issue, with page after page of enticing images that combine to tell the story. Favourite moments, apart from the panel above, include Kory hovering above the church like an orange angel and the first appearance of Crux. I also love how Jason is drawn, with world-weary, sad-eyes. I'm less keen on the way the sheriff does the weird tits-and-ass S-bend thing, but perhaps she's a shapeshifter. The bright, but not garish, colours of Blond also deserve praise, while Carlos M Mangual breaks out some fun fonts.