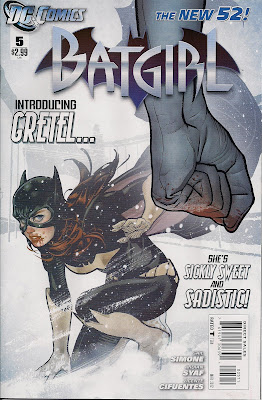 I love a mystery and there's a fine one here - how can the number 338 cause a mobster to murder his three loyal sons and try to kill himself? How is knife-happy strongwoman Gretel connected? And why does her hair switch from green to pink?

Batgirl is less keen on the intrigue, she just wants to keep Gotham citizens safe - including billionaire Bruce Wayne when his chauffeur proves part of the apparent mind control conspiracy.

And away from the costumed action, is Barbara Gordon's mother - not seen since she walked out on Babs and husband Jim years previously - on the level when she says she just wants to be friends? Given that Babs getting paralysed years previously didn't bring her running, why now? And what was her reason for leaving?

Plus, where will Detective Melody McKenna's obsession with Batgirl lead now she's been tasked with investigating the vigilante by none other than Commissioner James Gordon?

Writer Gail Simone is on top form here, mixing action and intrigue and putting a likeable, relatable character at the centre of it. For the first time since she reclaimed her title of Batgirl in DC's New 52 revamp, Babs is just getting on with it. The post-traumatic reaction to guns is no more, we're told Babs walks again due to neural implant surgery and the comic finally seems to be looking forward. The narration is particularly sharp this time, my favourite line being: ''Crazy lives here on a longterm lease'', and roommate Alysia looks to have dropped the annoying habit of referring to her new friend as 'Gordon. Barbara Gordon.' 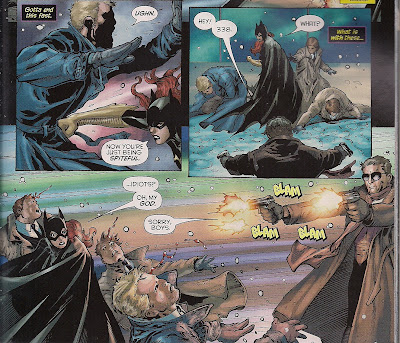 The fight sequences written by Simone are beautifully laid out by penciller Ardian Syaf and inked by Vicente Sifuentes - who also handles some pencils this time, clever lad - and take place in one of the most-realistic looking comic book cities around ... perfect for their spitfire Batgirl. They could happily tweak Babs mom - she's a little heavier of frame, but otherwise identical to her daughter, right down to the hairdo - but otherwise, it's all good. New character Gretel has a simple look, but a striking one that suits her MO. It's a shame, mind, that her first full on-panel appearance is undersold.

The cover is another lovely effort from Adam Hughes, a real asset to this series.

As the beginning of a new storyline, this is an excellent place to jump on board. Then maybe you could explain the title to me ... 'A candy full of spiders'. Say what? Has Gretel come straight from the witch's house? Is there a Hansel yet to show up? That's another fine mystery.
Ardian Syaf Batgirl #5 review DC New 52 Gail Simone Vicente Sifuentes