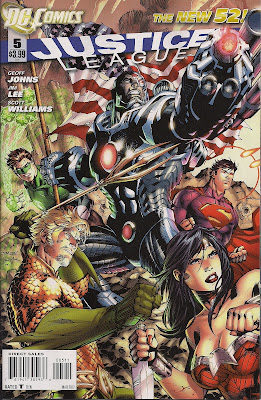 Darkseid has landed in Metropolis and has his eyes on Flash and Superman. More specifically, his omega beams, the deadly force blasts that can lock on to a person, making evasion almost impossible.

'Almost'. The fastest man alive finds a way to escape being blasted to atoms, and while Superman isn't so lucky, he is tougher so survives the painful burst of energy. Mind, he's stunned enough for Darkseid's flying monkeys - sorry, parademons - to whisk him away.

Flash shares the bad news with pal Green Lantern and new acquaintances Aquaman, Batman, Cyborg and Wonder Woman, who are pulling themselves together after being downed by Darkseid debris last issue. GL fires himself at the silent alien dictator but is beaten down while his colleagues flail around like an Enterprise crew on the command deck. All but GL - with one arm broken - and Batman wind up blasted streets away, bringing the issue's big emotional scene as Batman bids to persuade GL they should find their colleagues - GL is fighting mad and raring to go up against Darkseid again, even if it gets him killed.

This doesn't yet feel like a Justice League comic, but it's getting there. The heroes have stopped bickering in favour of addressing the big picture - the threat of Darkseid to all life on Earth. Hal Jordan's oafish behaviour comes to a head, bringing the promise of a calmer Green Lantern, while Flash impresses with his super-speed tactics. Batman intrigues with his very odd undressing on the battlefield, and an understandably scared Cyborg steps up into a literal baptism of fire. GL's reaction to Batman's reveal is priceless.

It's not all great, though. Aquaman gets something like four words, while Wonder Woman, in her dozen or so, comes across as a slash-happy dimwit. Hopefully writer Geoff Johns will up his game with regard to Diana, in particular, sharpish. 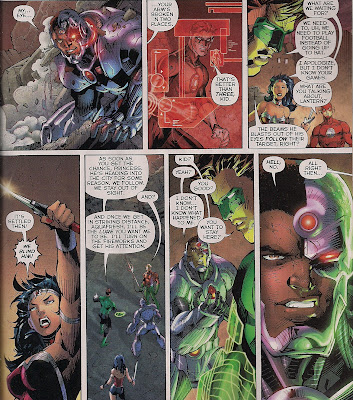 And if artist Jim Lee could perhaps draw her not looking like a blow-up doll, so much the better (click on image to enlarge).

Everyone else looks fine, but his Diana, in that scrappy tiara-effort, is rubbish - maybe I should blame one or more of the four inkers, but I seriously doubt any of them are tinkering with the boss' breakdowns. Darkseid is imposing but Lee's redesign isn't a patch on Jack Kirby's original, just as none of the New 52 costumes better previous versions ... they're all just fuss and faff, tweaking for the sake of it.

The best scenes are those involving Green Lantern: whether he's tickling Darkseid, bemusing Batman or playing big brother to Cyborg, GL is imbued with a rare intensity by Lee that matches Johns' script.

Next issue brings the origin of the new JLA to a conclusion, and after that, in #7, a Shazam back-up, signalling an end to filler nonsense such as this issue's sketchbooks showing the new designs for Aquaman, Wonder Woman and Cyborg. Maybe then this book will feel like $3.99 well spent.
DC New 52 Geoff Johns Jim Lee Justice League #5 review Scott Williams