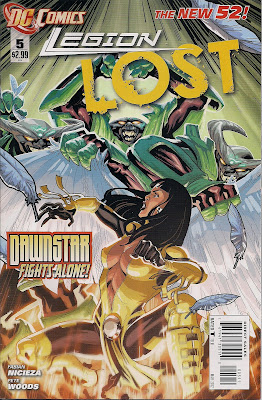 'Never stopped you either, energy-sock.'
And there you have it, my favourite line in this week's comics. But who said it? Stick around, embrace spoilers and I'll get to that.

As we rejoin the storyline, Dawnstar is fighting super-villain from the future Alastor - three of him, due to his manifesting the powers of a Carggite. As she attacks physically, Tellus tries to beat him mentally.

Elsewhere, a new demonstration of Tyroc's powers allows Timber Wolf to escape US security forces with the stricken Chameleon Girl, and he and Wildfire to join Tellus and Dawnstar. They know the latter two are in trouble, having felt the cry of pain from Tellus as Alastor resists.

Alastor, in his rage, causes a truck to crash, sending the driver through the windscreen. This in turn prompts an impressive display of super-tracker Dawnstar's ability to instantly calculate 'every movement of the truck ... the driver ... every individual piece of glass ... trajectories, angles'. But even as she hurls herself forward on angel wings, Dawny knows she won't be able to resist the oncoming truck.

She also knows Wildfire will arrive to save her, a matter not of super-powers, but of faith and love. And he does, before showing Alastor the extent of his anti-energy's force. It's Tellus who finally gets the drop on their foe, though, showing Alastor that while he intended to destroy the human race for supposed future crimes, he's actually guaranteed the universe that supposedly caused the death of his sister. Ah, sweet irony.

The revelation finally causes Alastor to shut down, meaning he misses the issue's big surprise - the return of thought-dead Legionnaire Gates. His and Wildfire's mutual joy at being reunited motivates the quote at the top of this review, a gem from writer Fabian Nicieza. Have some context, and a typically splendid panel from artist Pete Woods (click on image to enlarge). 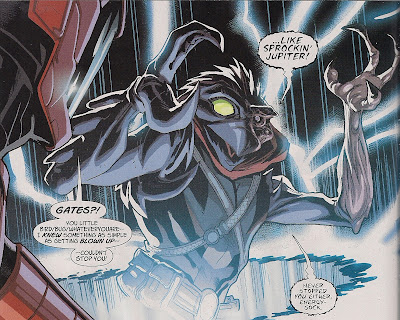 That's not the final surprise of this issue. But I should leave something for anyone still to read the book. It's another pacey, enjoyable episode from Nicieza and Woods. They're extremely good at splitting their overall story into immensely satisfying nuggests. Former Legion writer Jim Shooter was writing at his blog this week about the lack of clear fight choreography in superhero comics, and I suspect he'd approve of this series - cause and effect within panels is clear, and it's easy to imagine what there's not room to show; logical new uses for powers are found; characters are clearly identifiable ... this is 'simply' good storytelling.

And the praise must extend to colourist Brad Anderson, who is excellent at leading the eye where it should go, and producing dramatic lighting effects. And letterer Travis Lanham, for some distinctive work - he does an especially nice job with Tellus' narration, an easy on the eye yellow-out-of black treatment.

The only art tweak I'd suggest would be a return to a more classic costume for Wildfire, who currently looks more like a robot than an anti-energy ghost. Other than that, it's all good, with moments such as Tellus's mental battle with Alastor, and its resolution, outstanding.

Other commitments mean next issue is Nicieza's last, which is sad. Here's hoping successor Tom DeFalco keeps the momentum and character moments coming. Whatever happens, for the moment at least, we have one of the best Legion of Super-Heroes series in years.
Brad Anderson DC New 52 Fabian Nicieza Legion Lost #5 review Legion of Super-Heroes Pete Woods Travis Lanham