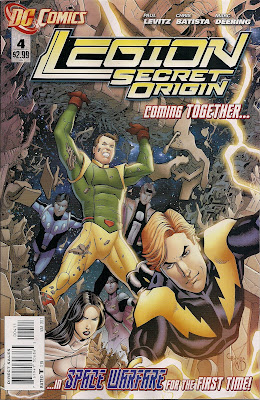 As the newly formed Legion of Super-Heroes grows, the mysterious attacks on backer RJ Brande continue. Chameleon Boy, Invisible Kid and Colossal Boy sign up, though Brainiac 5 resists the idea when Phantom Girl suggests he does too. The Science Police gripe to the United Planets about the Legion poaching its potential recruits, but the politicians are happy that the team is giving UP youngsters a role model to rally around. Out in space, UP Admiral Allon - Colossal Boy's dad - keeps watch over a wormhole after incursions by an unknown power, while on Earth Circadia Senius enlists Brainiac 5 to unravel the secrets of time travel.

It's all go, I tell you ... and still there's room for a fun fight with robots who don't respect Asimov, representing the Legion's first tussle as an official team. With less of the politicking of previous instalments of this mini-series, and more of our title characters, this is the best issue yet. Fun touches include Brainy using his force field to keep the dirty hordes of 31st-century Metropolis at bay, an experiment connected to the Silver Age of Comics and Invisible Kid's unexpected reasons for signing up with Brande. And it ends on a wonderfully hopeful note, delivered by Jaclyn Smith-lookalike Phantom Girl.

Speaking of Phantom Girl, Brainy seems a little in love with her, and he's not the only one, if Chris Batista's gratuitous shot of her intangible arse is anything to go by. Tut. 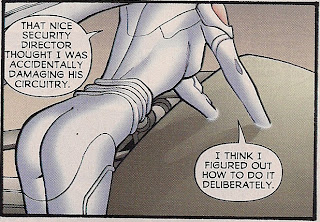 I really do like the penciller's work with Mark Deering, though, even if figures occasionally look as if they're being squeezed sideways. There are some superb expressions at play, and the background work is first-rate, with the 31st century looking most inviting. Top work, too, from colourist Wes Hartman and letterer Dezi Sienty - this story is going to make a fine-looking trade. And it doesn't read badly, either, with interesting parallel storylines and lots of character quirks from writer Paul Levitz. As a love letter to the Legion, this series is strictly niche, but it's a heckuva nice niche.
Chris Batista Dezi Sienty Legion of Super-Heroes Legion: Secret Origin #4 review Marc Deering Paul Levitz Wes Hartman