Red Hood and the Outlaws #5 review 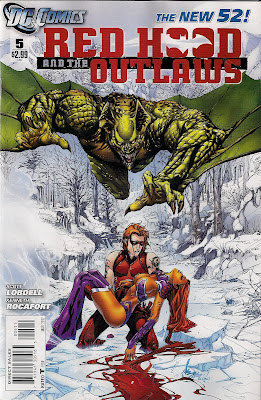 Artist Kenneth Rocafort and colorist Blond present a killer cover for the fifth issue of this consistently excellent DC New 52 original. The imposing monster. Helpless hero. Hurting heroine, hair flowing like blood. And all imposed on a gorgeous winter scene ...

The artwork's just as impressive inside, in a more sequential way, of course. The battle between the reptilian Crux and desperate Arsenal is fun to follow, with incident and emotion easily apparent. This being the case, writer Scott Lobdell is able to use narration and dialogue to add detail and fizz, as Arsenal - 'recovering hero' Roy Harper - subdues the creature he suspects of harming his friend Starfire, aka Koriand'r of Tamaran.

Crux's grudge against her arises from a spaceship belonging to her people having accidentally killed his parents - hardly her fault, but the formerly human Crux doesn't care - he hates aliens, and her kind most of all. He's failed, though, in his bid to remove Starfire's alien powers, due to not knowing her history.

Mind. she's not much use when it's round two between him and Roy - happily, Arsenal is ready to make the sacrifice necessary to end the fight once and for all.

Nearby, Jason Todd - Robin turned Red Hood - fights for his life against a member of the hidden race known as the Untitled. Along the way he learns that his foe, who has been serving as town sheriff, had nothing to do with the slaughter of his friends, the All-Caste league of assassins. Red Hood doesn't care, and murders her anyway, using a previously unseen ability that's shockingly unpleasant.

Mid-battle he flashes back to the time Ducra - Yoda-meets-Terminator matriarch of the All-Caste - supervised a ritual known as The Cleansing. She hinted that one day he'd expel the anger within him (the small matter of the Joker having beaten him to death and Batman failing to avenge him) and be glorious. Not this day, though, as the lifeless Untitled sheriff would attest.

Ace Jase reunites with Roy and Kori, and tells them they have to get out of town because an angry mob is on his tail - he's realised that the Untitled are taking over communities, controlling the good burghers. They flee, taking the injured Crux along ...

... and so ends another issue packed with incident, action and characterisation. It becomes obvious this time that Roy doesn't share his friends' attitude towards killing - Jason has been brainwashed into believing that offing someone is akin to giving them a marvellous gift, Kori's martial upbringing and past as a tortured slave have her primed to execute Crux, but Roy? He venerates life, and it'll be interesting to see if he can persuade at least one of his pals to come around to his way of thinking.

The only off-moment this time is a comment from Crux that implies he read the controversial first issue of this title (click on image to enlarge). 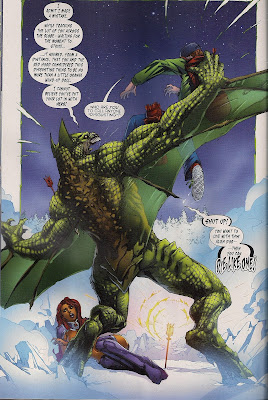 That's just a tad too meta for my liking.

Great page, though - Rocafort really imbues Crux with sinewy power, making Roy and Kori's situation seem suitably dire. The artist does similarly fine work throughout, with dramatic storytelling and dynamic layouts. Blond's colouring is the icing on the proverbial cake - bright where it needs to be, subdued elsewhere. And relative newcomer Carlos M Mangual has fast become one of DC's go-to letterers with intelligent, stylish calligraphy. The script from Lobdell is worth Mangual taking time over, being full of little revelations and big moments. I especially like the way the Outlaws' (no one has actually called them that yet!) camaraderie is morphing into friendship.