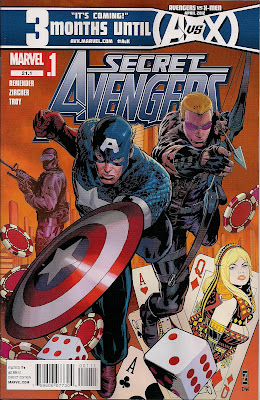 Captain America takes Hawkeye on a hush-hush mission to one of those ultra-corrupt little nations that populate spy fiction. Hawkeye's bombastic ways see things go awry, annoying Cap, who so wanted his pal to succeed - unknown to Hawkeye, Cap was testing his covert op skills in the hope he could succeed him as Secret Avengers leader.

Hawkeye is understandably miffed, given that Cap's known him for years and he's every bit the Avenger Cap is. Hawkeye goes off in a huff, Cap gets captured by a new Masters of Evil run by loincloth-loving Life Model Decoy Max Fury, Hawkeye rescues him and it looks like he'll get the job for which he never applied.

Well, it's the Secret Avengers, of course you'd not know you were up for a new position.

The last six issues have been the peak of the Secret Avengers series, as Warren Ellis and top-notch artists produced clever little connected one-offs showing superheroes as spies really could work. And perhaps Marvel should have quit while they were ahead, 'cos if this Point One issue is indicative of the future of this book, it's in trouble.

Because it makes no sense. As mentioned above, Cap has no need to test Hawkeye, he's worked with him on and off for years and knows his strongest areas. He seems to expect Hawkeye to see it as a compliment that he's even considering him, but Hawkeye is rightly perturbed. But does Cap apologise? No, he launches into a personal, insulting rant that's beneath him, and one Hawkeye doesn't deserve.

Then, in order for them to come good, Hawkeye is made to take out not just Max Fury but his pet super-villains - Whiplash, Vengeance and (a new?) Princess Python - with a few tricked-up arrows. They get a panel each in which to fall.

It's not all bad, with Rick Remender supplying some crisp, witty dialogue, Patrick Zircher doing a beautiful job on the illustrations and Andy Troy providing cool, textured colour art. The early action sequences, with Hawkeye and Cap escaping casino guards, are excellent (click on image to enlarge). Remender and Zircher gel well, with the pictures used to give us additional information rather than merely underlining the script. And I love that Hawkeye emphasises that 'Avengers don't kill' - he may have to retrain a few Secret Avengers ... 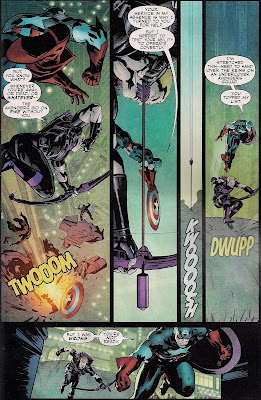 But the whole notion of the issue is so wrongheaded, the falling out of the heroes so unbelievable, that it makes for an ultimately unsatisfying read.

On the other hand, Remember is a fine writer, with standout work such as Uncanny X-Force under his belt. And for his coming run, beginning with #22 next month, he's teaming with the very talented Gabriel Hardman ... and Captain Britain is in there. So I'll try a few issues, and put the clunkiness of this good-looking, readable comic down to it being a Point One book, not so much a jumping-on point as a bump in the road.

Zircher, with colourist Dean White, provides a terrific movie poster-style cover. Marvel's marketing department almost ruin it, with a ruddy great advert for an event not starting for three months - are they scared we won't get our orders in early? Newsflash, Marvel, every cover ad is going to sour me towards Avengers vs X-Men just a little bit more ...
Andy Troy Dean White Patrick Zircher Rick Remender Secret Avengers #21.1 review