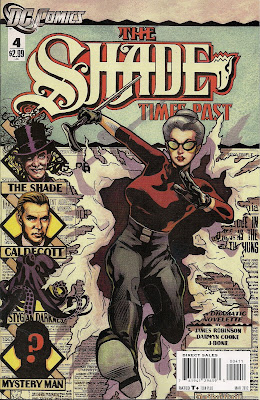 You may recognise the old dear on Tony Harris's witty cover ('Stygian Darkness' indeed!) as one of the most ... singular ... characters of the Golden Age. If you don't, I'll leave the details to come as a surprise when you read this comic.

Because it's not one to pass up. The Shade #4 is written by James Robinson at his Starman best (it's even a tale of Times Past, the popular done-in-one interludes from the ongoing arcs); pencilled by New Frontier's Darwyn Cooke; inked by the extremely talented J Bone; features The Shade's first foray into fighting the Nazis as he finally acknowledges the family he left behind decades previously; includes spies, turncoats and not one, but two guest stars from the dawn of superhero comics; and it feeds back into this splendid maxi-series' ongoing plotline.

From the wry opening lines ('It was April 14, 1944. And I confess, until that day my only anti-German act had been abstaining from pumpernickel') to a touching close, this is just a wonderful story. It uses DC's rich family history, without demanding any familiarity from the reader. So while it may enrich your experience to note that a plotline originating in a 1940 Quality Comics strip is finally tied up, if you don't know, the detail works simply as a coda to one character's story.

Robinson also lets us get to know the Shade a little better, shining light not just on his attitude to patriotism, but on the knave's identity he has constructed for himself. His descendant, Caldecott, manages to come across as a truly good man without seeming in the least sanctimonious. And as a snapshot of America during the Second World War, the script works a treat. 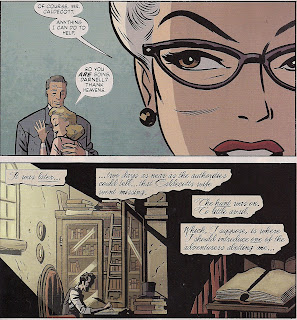 And it's all beautifully brought to life by Cooke and Bone, whether we're with the Shade in his gothic study, on the shiny streets of Opal City or over the Atlantic in an experimental aircraft. There's a real spark to even the most minor player, while the street look adopted by the Shade for a spot of daytime deviltry is a sharp alternate take on the sometime villain. This really is first-class cartooning, delightfully coloured by Dave Stewart. Letterer Todd Klein, meanwhile, applies his intelligence and mastery of style to the story: small font for pleading, wavy words for punch drunk, elegant script for a journal, and so on. The only phrase not in Klein's vocabulary is 'phoning it in'.

Whether or not you followed the Starman series which hosted Robinson's reinvention of the Shade, even if you've not read the first three issues of this series (and you should), I urge you to give this one-off a try. It's simply a fine comic story.
Darwyn Cooke Dave Stewart J Bone James Robinson Mystery Man The Shade #4 review Todd Klein Tony Harris Vigilante