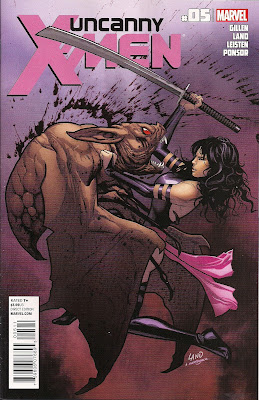 This issue the Brotherhood of Evil X-Men handles a dangling plot thread from an X-Force story. Angel had become evil old Archangel again (he'd fit right in here) but Psylocke was too soft to kill him, meaning 5,000 people died in a nuclear blast. Oops. The spot where they perished is now a temporal anomaly nicknamed Tabula Rasa, a kind of Savage Land from the other end of time. Inside are future folk worshipping X Force, and monsters who need bashing.
But that's not important right now. What is, is the fact that the plot maguffin allows writer Kieron Gillen to split Cyclops' Extinction Team into pairs, elicitng some elegant character moments. There's Magik bringing brother Colossus-cum-Juggernaut out of his funk; Hope dropping the tough girl bit long enough to enjoy a flirt with Sub-Mariner; Storm and Cyclops discussing the mutant schism; and Magneto forcing Psylocke to admit she knows more about Tabula Rasa than she's telling anyone. Only the robotic Danger is left out, with Cyclops, as is usually the case, restricting her to communications - and don't think the formerly murderous AI hasn't noticed.
The best thing Gillen does this issue is begin the rehabilitation of Cyclops - there's not one instance of him being a pompous asshole; instead, he's the smart, nurturing leader he was meant to be. There are even signs that ill-feeling lingering after the schism won't last long.

The much-maligned Greg Land turns in the best work I've seen from him for years - very few loony toothpaste ad model grins (Magick, and she is meant to be a little skewed) but plenty of action-appropriate poses. And he produces not simply isolated images, but proper storytelling. Like this page (click on image to enlarge): 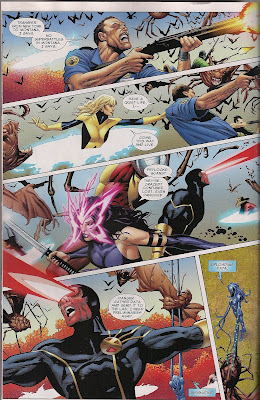 There's a pic of Storm having a bit of fun amid the danger that may well have started out as an ad, or glamour image, but it works and Ororo doesn't get enough spotlight moments these days ... the woman used to be a star! And Magneto looks magnificent, never has his helmet looked so shiny (ahem).
Backing up Land with one of the most gorgeous colouring jobs I've seen are Justin Ponsor, Laura Martin and Guru Fx. And Ponsor it is who adds the hues to Land's grabber of a cover.
There's a cliffhanger as the bad guy shows up, but he's no one I know. Apparently a Celestial. Celestials are boring, so hopefully not. Then again, Gillen books are never boring, so perhaps the - Immortal Man, is it? - will display a previously unremarked wit. And tap dancing ability. Yeah, I'd buy that for four dollars.
Greg Land Guru-eFX Justin Ponsor Kieron Gillen Laura Martin Uncanny X-Men #5 review