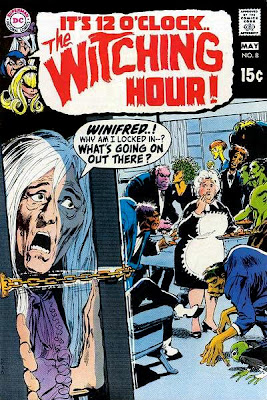 Indulge me for a minute or two, as I take a look at a comic I've wanted to read most of my life. The eighth issue of DC's 1970s mystery anthology The Witching Hour, hosted by weird sisters Mildred, Mordred and Cynthia. That cover haunted me, as I came across it in numerous DC house ads of the time. Who was that poor old woman? How had her servant fallen in with demons, ghouls and a gorgon? Would the old dear wind up with cheese and pineapple on a cocktail stick?

As a six-year-old, I was unable to trawl newsagents looking for it, and anyway, distribution of American comics in the UK back then was spotty at best - random issues came over as ballast on ships.

Lack of copies at the time meant there was little chance of finding this issue as a back issue, so it's only now, with the first 19 issues of The Witching Hour available as a chunky black and white Showcase Presents paperback, that I can read the story behind the image.

The issue opens with 'The True Picture of the Servant Problem at the Witching Hour', a short framing sequence by two greats, writer Sergio Arigones and artist Neal Adams (alternating his own style with that of the witches' founding father, Alex Toth, to fascinating effect). A hapless photographer is escorted to the ladies' castle by Egor, the servant whose face is ever-unseen, to take a portrait of the weird sisters (click on my snapshots, to enlarge). Before the snapper can begin, though, a tale from Mildred ... 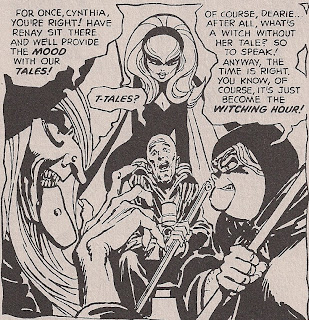 ... Above and Beyond the Call of Duty, by the aforementioned creators, is a neat little entry in which a rich old man desires the youth of his manservant, and the affections of his maid. To get them, Jonas Sentry sells his soul but - wouldn't you know it? - he hasn't thought through the consequences. For one thing, it's not wise to kick your old body to its death down the stairs when the Devil is on hand to call the cops and report a 'murder', ensuring that while you're guaranteed a long life, you're spending it in prison. 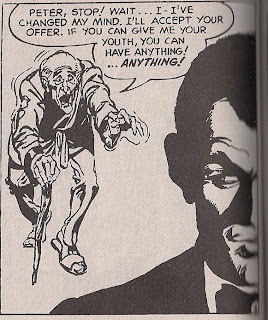 And then, it's the cover story, as related by Mordred. A kindly looking domestic shows up at rich old Emily's house, offering to clean the place for three days, '...just for the joy of being in this beautiful house'. And not only is she a first-rate domestic, Winfred also makes a mean cup of tea. Special tea. Tea so strong it sweeps Emily off her feet and into her sickbed. Soon, Winifred is turning away visitors - the cousin, the doctor, no one can get near. Until, on the third night, Emily hears noises. Locked in her room and weak, all she can do is drag herself to the keyhole and see the horrors without - witches and monsters ... doing the Frug.

The freakish noises drive Emily half-mad, and she finally passes out. Next day she's awoken by Cousin Elmer and Doctor Buchanan, who find a note from the departed Winifred: 'Dear Miss Emily. I thank you for the use of your lovely home! It made our annual meeting a great success. You really must learn to relax more! Get well! Love Winnie. PS We hope to see you again next year ... that is, if we don't find a BETTER place!' And on the doorknob we see scratched, 'Friday 13th'.

So on the one hand, the status quo is restored; on the other, there's that kicker - the threat that Winifred and her weirdos will be back. Somehow I don't think Emily will be hanging around to find out.

It's a marvellous little tale from the prolific pen of Arigones, with art from the masterful Nick Cardy. Over the course of the story's six pages, the pair ratchet up the tension with a sharp, sly script, and art whose mood veers between claustrophobic and all-out madness - below, within two panels. Cardy manages to make the monsters ridiculous - check out the gorilla in bib and tea - while unsettling. Quite the trick. 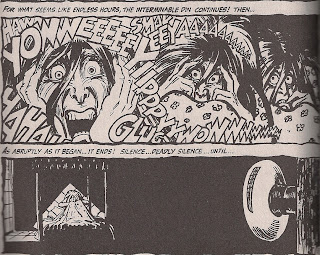 I've waited decades to read this story, and it doesn't disappoint. Neither does the cover. Unlike many DC titles of the time, whose covers regularly promised more than serial storytelling would allow them to deliver, as an anthology The Witching Hour has no need to cheat with its cover - and so the grabber image by Adams is a direct representation of the story. 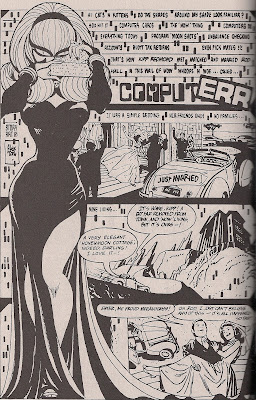 And finally so far as the issue's theme goes, we have another servant-centred story, 'ComputErr', written and drawn by the great Alex Toth and told by the super-sultry Cynthia. Matched by computer, Kipp and Rod set up home at his country seat, watched over by toad-like servant Ferencz. As Rod embarks on ever-longer, more-frequent business trips, Kipp is forced to spend time with Ferencz. And while he only wishes to please her, she's repulsed and finally snaps, telling him to leave her alone. Frustrated at being denied contact with the world beyond the house, Kipp tries to walk out. But Ferencz locks her in a room until Rod returns. That's when she sees her chance. Kipp leaps into the car he's stepped out of and drives off, but not before (deliberately?) reversing into Rod, leaving him like a crumpled doll. Happily, Ferencz can put him back together - Rod was a robot, created to seduce a bride to keep the  less-than-Adonis-like Ferencz company. And now he's going to have to start again, with a new-look Rod to net a fresh computer-bride.

But that's not all. There comes a knock at the door. The police. Rod's car's been in an accident and, at the scene, the broken body of Kipp. She was a robot, too!

Well, that's what happens when you rely on a computer to sort out your love life, or so Toth reckoned four decades ago. And while his story is dark fantasy, a fair few horrific matches have been made in the interim. It's a smart little script, lushly illustrated by Toth, who doubles the number of panels you might expect to find on a page to produce a primitive computer-tape effect. The emotions are big, and I couldn't help but feel a little sorry for the lonely Ferencz in this Twilight Zone-style fable. And while a sci-fi horror might seem out of place in The Witching Hour, Cynthia was one hip young witch.

And then it's back to the framing sequence. Poor Renay has been petrified by the spooky stories - literally. Egor tosses him into the swamp and vanishes into the night, and the sisters despair of ever showing his face to us. Then, a banging at the door, assumed to be readers, annoyed at being denied a look at Egor. In fact, it's a little girl, with a present for the three ... a photograph of her with Egor. Such a shame his face is masked by the trees' shadow. Unusually, maybe uniquely, these framing stories were a serial, so the mysterious tyke returns in #9. I can't wait.

After a one-page text story - to recreate the authentic Seventies experience I've not bothered to read it - a bonus 'Twice-told Tale'. It seems the comic was educating readers in urban legends long before Supernatural and the like. This is the tale of young lovers, a sports car and an unattached hook. It's an efficient two-page chiller from writer Ron Whyte and illustrator Jack Sparling. Cynthia presents the tale as an anachronism from the Fifties ... who knew it'd still be scaring teenagers today?

After reading this issue, I'm even more sorry that the 1970 me missed it - it would have fed my nightmares for years. I'd read some more issues, but not right now. After all, it's 12 O'Clock ... The Witching Hour!
Alex Toth Jack Sparling Neal Adams Nick Cardy Ron Whyte Sergio Arigones The Witching Hour #8 review
Location: Leith, Edinburgh, City of Edinburgh EH6, UK