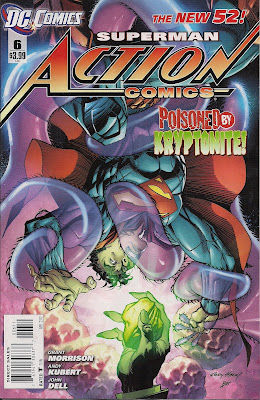 It says Action Comics on the cover, but we're firmly in All-Star Superman territory here, as Grant Morrison dips into his bag of high concepts. In doing so, and with the aid of artists Andy Kubert and John Dell, he gives us the best issue of this comic since the DC New 52 relaunch.

A side-story amid the ongoing Brainiac storyline, 'When Superman learned to fly' sees the Superman of 2012 travel five years into the past - the regular Action time setting - to 'save the life' of the rocket which brought Kal-El to Earth. At his side are the founders of the 31st-century Legion of Super-Heroes - Saturn Woman, Cosmic Man and Lightning Man. Last month members of the Anti-Superman Army stole the rocket's power source which, the mad scientist addressing the troops informs us, can yield different varieties of Kryptonite guaranteed to give Superman a headache - and worse.

We soon learn the surprising location of the villains' secret headquarters, get a new spin on Titano the Super-Ape and see the true significance of that oft-told first meeting between young Clark Kent and the Legion.

I could go into more detail, but most comics are better read than described and if you're at all interested in Superman, this isn't an issue to miss. There are hints about the gathered villains (amusingly, one of 'em will be familiar to Golden Age fans as Lois Lane's niece, Susie Tompkins*), insights into how Clark felt about being sent across space and more personality for Lightning Lad - sorry, Man - than he's had in years. 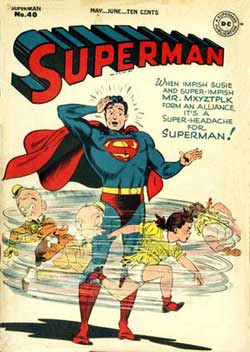 Good lines abound, my favourite being a toss up between 'How about no teeth?' and 'We'd built him up as this idol in our minds, this myth, and he was just a gawky caveman kid.' Check out the book to see how much better they are in context.

Action Comics #6 is mainstream Morrison at his best, with character as much to the fore as ideas in a story that requires concentration, but no PhD. And the odd iffy face apart, penciller Kubert and inker Dell do a tremendous job delivering powerful visuals that grab the eye without compromising the storytelling.

The story ends with hints about the future, while the comic closes with a back-up tale focusing on the past, specifically the day Clark Kent left Smallville. He goes with a typically generous gesture to a neighbour, and the love and support of pals Lana Lang and Pete Ross. Writer Sholly Fisch delivers a heartwarming, but never cloying, snapshot of Clark's life just before he moved to Metropolis, while illustrator CrisCriss and colourist Jose Villarrubia make the memories sing. There's one almost-full-page panel for Clark and Lana that's simply gorgeous in the way it marries the everyday and the super.

This is the first comic I've read this week, but I'll not be surprised should it be the best - it's issues like this that will ensure Superman survives the 21st century - and maybe even reaches the 31st.