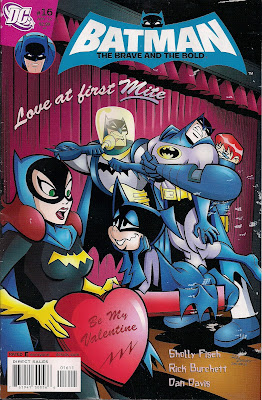 The Mad Mod has invaded Gotham Fashion Week, determined to nab the specialised costumes Batman has loaned out for the occasion. There's the Undersea Batman, Mummy Batman, Azbats and more. Soon the Mad Mod and his mobsters (Modsters?) are working the looks, ready to use them in a crime spree. Such bare chic! Happily, the Caped Crusader easily gains the upper hand via the suits' emergency shut-off systems. But Batman's biggest fan, Bat-Mite - the magical imp from the Fifth Dimension - isn't pleased at Batman's 'cheat' and hands the upper-hand back to the Mad Mod, forcing his idol to show off his 'super-hero awesomeness'.

Which he does - not that Bat-Mite is paying attention after Batgirl shows up. This is the babe for him! In a bid to win the Dominoed Daredoll's heart, Bat-Mite employs all his magical wiles. He offers Batgirl her own comic, shows her there are much worse beaus around, demonstrates his skills as damsel-catcher ... but Batgirl is one kitten that ain't smitten. Finally, the imp finally turns his attentions elsewhere, to another heroine who may be perfect for him.

If there's another comic as enjoyable as this St Valentine's special in 2012, I'll be as amazed as I'll be delighted. For this is page after page of smiles and laughs as we're given homages to everything from Silver-Age Lois Lane and Wonder Woman stories to Roadrunner cartoons via Peanuts. Throw in the Fiddler, Pied Piper and Music Meister, the return of Mister Polka Dot, and giant props, and you still don't have the full picture of how brilliant this issue is (click on image to enlarge). 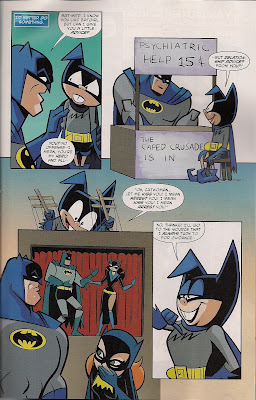 The script is witty and frothy, skewering all its targets, the art is brave and bold and bright. Writer Sholly Fisch and artists Rick Burchett and Dan Davis have produced a love letter to DC Comics in general, and Batman in particular, that reads like an issue of Ambush Bug circa 1985. So far as comedic comics go, I have no higher praise.

The only downside of this gem of an issue is, it's the last. Batman: The Brave and the Bold ends here. But don't despair - like Bat-Mite, it could pop back at any time. I hope so, because with DC's New 52 revamp it's the only comic that's been acknowledging the company's storied history, in tales that could be enjoyed as much by young kids as ancient fanboys.
Batman: The Brave and the Bold #16 review Landry Walker Eric Jones Dan Davis DC New 52 Rick Burchett Sholly Fisch