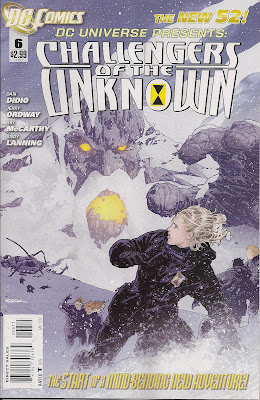 Brought together for a reality TV show, a group of minor celebrities are on their way to the Himalayas when a weird face in the window of their jet presages a crash. They awaken in the land of Nanda Parbat, but not before Challengers producer June Robbins has a dream in which a horrific version of her boyfriend Ace, who'd been co-piloting the plane, stabs her through the heart.

In the waking world, Ace is absent. A man who introduces himself as the high priest of Rama Kushna tells June, 'He was not one of yours, therefore not here.' All the others - science writer Prof Haley, singer Red, athlete Rocky, production team member Clay, billionaire Ken, internet star Brenda and co-pilot Maverick - are fed and watered. Or rather, poisoned. Something the monks give them causes the visitors to pass out, just as they're warned of the challenge of 'what lies ahead'.

They awaken on the side of the mountain, by the wrecked plane, apparently weeks later. Their radio's wrecked but a working GPS brings hope of rescue. And a helicopter duly arrives. But so does a monster ...

As for what happens next, I say give the comic a try. Longtime DC fans, or indeed, anyone who read the last few issues of this tryout title, will have caught the Namba Parbat and Rama Kushna references. Yep, we're back in the mystical realm overseen by a distinctly dodgy goddess; Deadman's boss, Rama professes to be watching out for mankind but her haughty manner and offhand treatment of her agents make her less than trustworthy.

And now it seems the Challengers are to be her lackeys. Living on borrowed time, they're ready for some predestined mission, but will they have the courage and skills to fulfil it? Will their time run out? One of the cast is already culled by issue's end, while Ace remains missing and possibly a monster. I'm looking forward to the continuation next month.

The Challs have been around in one form or another since the dawn of the Silver Age. Originals Ace, Prof, Rocky and Red were soon joined by June and occasional substitute members. Here we have several new characters, but writer Dan DiDio gives everyone enough screen time for at least an inkling of their personalities to be gleaned. 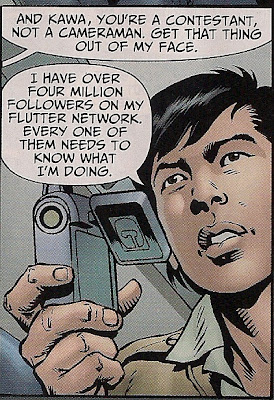 I'm not immediately thrilled by the Nanda Parbat add-on to the team's traditional survivors-of-a-plane-crash origin, as I like series to stand on their own, but we'll see where it goes. If Deadman shows up, as he did in the team's Seventies series, I shan't complain.

I shall complain about the fact that only one member of the cast winds up stripped to their scanties. Dream June. And then she's stabbed in the chest, blood spurting towards her bra. I really can't see the need - in stories I've read, honorary Challenger June was always treated as a full partner, not the decoration to be threatened. This just feels exploitative.

On the upside, the reality show is a clever way to get the Challs together, and the expanded cast allows for a bit more diversity than just four white guys - Maverick is African-American, Ken Asian-American. I don't know if the new people will stick around awhile, but they're here for now.

Jerry Ordway is the perfect artist for this series, a proper craftsman with great storytelling instincts - I don't like June's dream, but there's no denying Ordway captures the horror of the sequence, with distorted perspective and close-ups of a manic Ace. And the opening page of this scene is one of the cleverest in the book, as script and art gel to great effect. With the aid of inking trio Ray McCarthy, Andy Lanning and Mario Alquiza, Ordway does a fine job of making the characters unlike one another, and does a nice line in Kirby-esque nasties. The colours of Tony Avina are well chosen for the various settings and moods, while the lettering of Travis Lanham works well with the art. And whoever designed that stylish logo, sitting over Ryan Sook's pulp throwback cover illustration, deserves a Hostess Twinkie.

While never massive stars, the Challs were the first DC heroes to break out of a tryout comic - they debuted in Showcase #6 back in 1957 - and given the quality here, there's a chance they could do the same thing in the New 52 era of 2012.
Andy Lanning Dan DiDio DC New 52 DC Universe Presents #6: Challengers of the Unknown Jerry Ordway Marlo Alquiza Ray McCarthy Ryan Sook Tony Avina