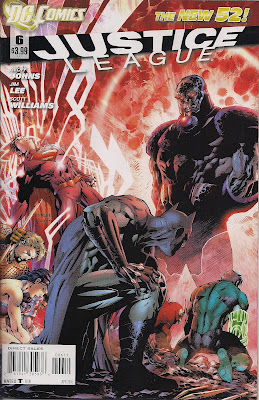 Earth is under attack by parademons from the evil world of Apokolips but seven superheroes have assembled to form our planet's last, desperate defence. While five face down the leader of the invasion, Darkseid, two are stranded on his hellish world.

Set five years in the past of the rebooted DC Universe, this comic features heroes with considerably less experience than we're used to. Happily, Darkseid, too, seems strictly bush league. Instead of using his planet-shaking strength as a New God to inflict damage on Wonder Woman, Aquaman, Green Lantern, Cyborg and the Flash, he stands around dumbly as they pile on. The terrifying, unstoppable Omega Beams of previous issues go unused before two of the heroes put paid to that idea by getting stabby with their weapons. And as for sending Darkseid back home with his tail between his legs, wouldn't you know it? Cyborg has an app for that.

Yep, I'm underwhelmed. We've spent five issues building up Darkseid as a massive threat only for him to be defeated by his accidental creation of Cyborg mid-incursion. His own tech, seeded into the metal suit created by Victor Stone's dad, sends him packing. Which is ironic, but far too pat - Cyborg happens to have the means, something the suit handily tells him.

The one moment which sees the heroes use their brains - Aquaman and Wonder Woman disabling Darkseid's eyebeams - is undersold. With neither mention nor display of the Omega Beams this issue, newer readers might assume the heroes are simply homaging the old 'injury to the eye' motif.

We do get to see the beginning of teamwork, even if it is pretty much of the 'all pile on' variety. That's fair enough, this is the origin of the League so the members-to-be don't necessarily know one another's shticks. And Batman and Green Lantern prove useful at geeing up a doubting Cyborg, while GL helps Superman resist Darkseid's grip.

A big scene last issue saw Batman tear off his mask, cape and chest-symbol and allow himself to be taken to Apokolips, in the hope of finding Superman. As we join him, it seems the parademons didn't bother sticking him on a meathook, a la the unfortunate background players, meaning he's free to skulk around as henchman Desaad reveals what Darkseid is after (for once, not the Anti-Life Equation). Maybe Batman used his escape artist knowledge to get free, but some reference would have been nice. It's not like this 24pp story is packed with plot detail that needs the space - nine pages are given to splashes.

Batman proves basically useless on Apokolips, with Superman escaping the torments of Desaad only because Cyborg makes some Mother Boxes go 'ping'. It's very odd, after last month's big set-up - the unCaped Crusader with no plan, and no improvisation. All he does is yell at Superman to wake up and get through a Boom Tube.

Mind, none of the heroes do anything amazing with their powers or skill sets - there are no super-speed tricks, clever green creations, Amazon feats, Kryptonian power combinations, Aqua-action ... it's all bish bash bosh. Hopefully, as time goes on, writer Geoff Johns will show what the heroes can do other than luck out and maim enemies with handy magical weapons.

After the big fight, we move forward a few weeks. An Everyman who appears at the start of the issue, presumably in a belated attempt to put a human face on the cosmic threat, writes a book christening the Justice League. It's a better name than the in-joke tag Flash comes up with at a presidential ceremony honouring the supposed team. And the cover of the book, assuming it features a subsequent JL adventure, warms my heart.

As for this story overall, I'm lukewarm. Johns has provided plenty of big moments for artist Jim Lee to draw, but there's been very little emotional meat. Darkseid sent a bunch of demons to Earth, heroes got together and, mid-bickering, sent him away again. Read as a whole, I suspect this origin will entertain the eye, but leave the mind wondering why so many pages were necessary

It's taken six issues, but by the end of this book the Justice League stands together. Physically, at least. They're still not all delighted at the idea of being a team. Which is disappointing - sure, heroes can be flawed, but when they're in costume I want DC's finest to be shining lights who together form a beacon of hope. Not grumpy buggers who can barely stand to be in the same room together. With luck, as the story catches up with the present day, the Leaguers really will be 'super friends', with more banter than snarking.

Because Johns is good with the banter - there are a few nice gags here that don't disrupt the story tone. And Lee sells them well, alongside the aforementioned big moments. Some of the smaller scenes are less successful, such as this. 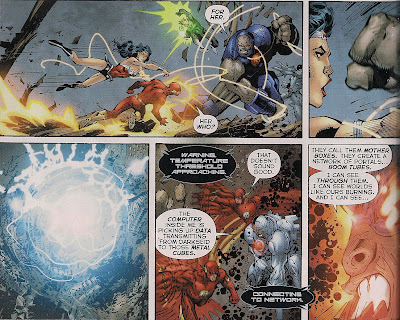 Anyone know what happened there? Darkseid's about to hit Diana, but there's a wodge of white. Cyborg's white noise blast? A passing box of explosive soap powder?

Overall, Lee's work - inked by Scott Williams, Sandra Hope, Batt and Mark Irwin - is fine for this kind of story, all noisy and Nineties. The cover's a tad dodgy, mind; the staging of the heroes doesn't draw me in, though fans of strong backs will likely enjoy it. Keith Giffen, back in the Eighties, took the same basic idea and went for a more straightforward composition. I think it works better. 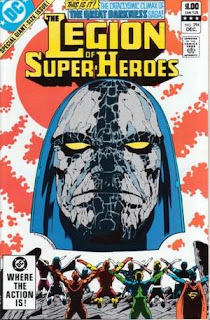 In other news, there's actually a back-up in this $3.99 issue, rather than the customary text padding. It sees the mysterious woman who merged universes to form the New 52 Universe named as Pandora. She and the Phantom Stranger have mysterious conversations, presaging some crossover to come. She's going to do something, he's agin it, she shoots him with guns I can only describe as mysterious. He's fine cos he's already a spook. Or an angel. Or, as this story would have it, a cross between rubbish DC character Pariah and Marvel's Watcher.

So, that's the opening storyline of the new Justice League, if not ended (there are intriguing mysteries for the future/annoying loose ends) so much as stopped. Lots of flash, not much substance but selling by the bucketload. The big test will be how many newer readers come back after this opening arc.

Hyped as the flagship New 52 book, Justice League fails in DC's stated aim of giving us fresh storytelling approaches to bring in a new audience. The narrative isn't broken into chapters so much as random lumps. Events come and go with little explanation and the significance of occurrences is rarely clear. Familiarity with characters is taken for granted. Recaps? What are those?

The people who will get the most out of this book are those intimate with Jack Kirby's Fourth World saga, able to envision the grand designs in which Darkseid specialises; if you don't know Darkseid and his parademons, the JLA are simply fighting random monsters. Johns does Darkseid a serious disservice, giving one of comics' greatest bogeymen a charisma bypass.

There's little here to bring me back next time, nothing I can see that would make anyone a JL fan. Curiosity will have me back next month to see how the League of 'today' functions, and to check out the debut Shazam back-up. But unless this book starts delivering less drawn-out, more satisfying stories - the 34pp tales of Steve Englehart and Dick Dillin in the Seventies Giant issues would be a useful template - I'm gone.