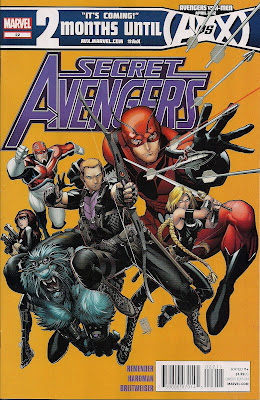 It's a changing of the guard. New creative team, new members, new threats.

Secret Avengers #22 sees Captain America hand over the reigns of the Avengers' covert ops team to Hawkeye and recruit Captain Britain to join Valkyrie, Black Widow, Beast and Ant-Man. Their first mission takes them to Pakistan, where a frightened young mother has been kidnapped by terrorists after manifesting strange abilities. The Avengers want to rescue her, but they're not the only metahumans on the scene - four people from all corners of the globe gather to recruit the woman they see as a fellow 'descendant' of some mysterious 'father'.

In battle with the Avengers, the newcomers show they can adapt to any power set, and redouble it, putting the Avengers at a distinct disadvantage. The 'Adaptoids' get away with the woman and her son, heading for (I'm guessing based on appearance) Bagalia, the outlaw state which debuted in last month's Secret Avengers #21.1 Gathered there are other adaptoids, some with appearances based on members of the Avengers. What they don't know is that a real Avenger is about to show up - Ant-Man has stowed away with the Adaptoids.

Adaptoids, eh? It seems we have here relatives of classic Avengers baddie the Super-Adaptoid. That alone guarantees I'll be back for a least a few issues. The dialogue from debuting writer Rick Remender also helps. After a bumpy start during a vignette with Captain Britain in Merrie Olde England ... 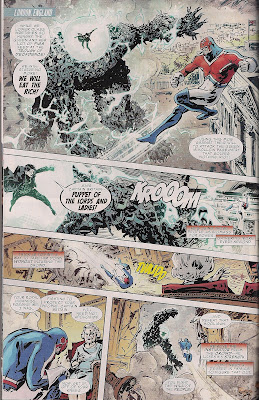 ... things improve greatly when Brian (decades after his debut, I notice that Brian is mere letters away from Britain!) arrives at the Secret Avengers' new headquarters, The Lighthouse, which, like SHADE HQ over at DC, is a miniaturised Wonderland. He's soon bantering with the Beast and being rubbed up the wrong way by Hawkeye; this is proper Avengers and no mistake! Remender captures Brian's character nicely, the way he veers between confidence and arrogance. Hawkeye, too, is on form, a charming blade, while the Beast is the loquacious genius of old, Black Widow the spicy spy, Valkyrie the grim Asgardian, Ant-Man the cheeky cynic. The different personalities make for a group with a lot of potential (I can't say I'm thrilled that Venom is joining next month, though).

Lord knows what's meant to be covert about them, mind. Yes, the new base is teeny-weenily hidden from prying eyes, but they're still diving into foreign countries in full costume, using their own names. Oh well, we'll see where Remender goes.

Wherever he goes, I hope artist Gabriel Hardman and colour artist Bettie Breitweiser accompany him. Together they produce naturalistic work that suits the slightly harder edge a covert ops Avengers book should have. They ground the fantastic in the real. So far as individual designs go, their Captain Britain is remarkable - he has the vibe of defining artist Alan Davis without being a second-rate homage. And Valkyrie is stunning, as serene a warrior as Asgard ever produced (now, if only someone would give Val her winged horse and cape back!). In fact, everyone looks marvellous, apart from that strange person above claiming to be the Queen - oh well, it's not like there are 60 years of photo reference online.

The splendiferous cover is the work of illustrator Arthur Adams and colourist Laura Martin. Terrific figurework and a striking background. More please.

So, a good start. Not quite good enough to stop me resenting the $3.99 Marvel is charging for 20pp of story and art, but I'm plonking down my money. So far.
Arthur Adams Bettie Breitweiser Gabriel Hardman Laura Martin Rick Remender Secret Avengers #22 review