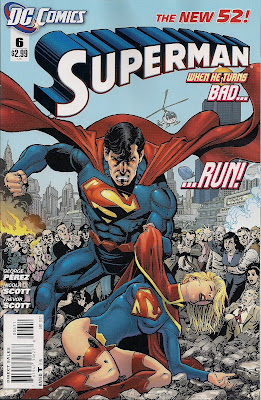 It's Superman vs Supergirl. Again. We first saw this match only four months back, in Supergirl #2, but here it is once more.

There are differences. That time Kara Zor-El, new to Earth, was lashing out against its greatest defender. Now she's protecting the citizens of Metropolis as Superman lashes out against the city.

And in fact, this isn't Superman at all, but a human-sized batch of alien nanites out to transform Earth into a copy of its lost homeworld. We learn this when the real Superman, who had been cast out into space, returns to Earth to help Supergirl who, despite her considerable powers, is caught offguard by the imposter's savagery.

Superman drags the fake across the world to icy wastes where he proceeds to beat him down with the scariest power of all - super-exposition.

This really is one wordy fight scene, as Superman explains to the suddenly confused imposter why it's been smashing up Metropolis, killing criminals and generally besmirching his hard-earned good name. Superman's knowledge is a result of sharing the being's memories while out in space. The scene - and an earlier solo infodump enjoyed by Superman - makes sense of the last five issue's worth of weird alien attacks but it's a tad convoluted, and doesn't make for the most elegant battle ever.

But ... last week I was having a right old moan about not understanding what was happening in Wonder Woman #6, so it would be a bit rich to out and out condemn this issue for its big dollops of explanation. Writer George Perez is determined we'll understand all, and DC generously gives his story room to breathe - this is 23pp for $2.99, not the line-wide standard of 20pp.

It turns out that the pseudo-Superman ties into the Collector of Worlds storyline currently playing out, in fits and starts, over in Action Comics. That's where, in a fortnight, we'll see what happened years ago that led to this storyline.

It's all a bit baffling - DC wants new readers for the New 52 Superman revamp, but rather than let Action Comics play out its Five (or maybe Six) Years Ago story, and do something separate here, they tie the two together. Instead of two discrete, satisfying tales we get interconnected ones that are awfully drawn-out. And when it seems this comic's strand is played out, there's an epilogue by the coming new creative team tying things to Stormwatch and the Daemonites inherited from Wildstorm Comics.

It's all a bit much. If you want to be reader friendly, DC, shorter stories are the way to go. Multi-parters linked to other multi-parters tying into continuity from the Wildstorm Universe, isn't. The New 52 should feel refreshing, not cluttered.

Judged on its own merits, Superman #6 is pretty decent. Perez's script is well-paced, if not perfect. Never mind the big talk scene, I could really have done without references to a reporter soiling his pants when dropped from a height by Fake Superman - what is this, the Poo 52?

But Perez handles Supergirl well, following the lead of her own title by making her ever more a hero of Earth. His Lois Lane is the capable, caring journalist she should be. In fact, the entire large cast is choreographed well. And I like Superman referring to heat vision and super-hearing as 'optic fire' and 'auditory power' - that's Clark Kent, noted overwriter, that is. My favourite moment this issue sees Kara applauding Kal after he defeats the pretender - it's a turning point in the relationship between two people who might be close, but are yet strangers (click on image to enlarge).

The pencils and inks of Nicola Scott and Trevor Scott (are they perhaps related? Probably not) make for a very good-looking superhero book. Nicola's well-composed pages, replete with excitement and emotion, are sleekly - but not coldly - finished off by Trevor. Brett Smith adds another layer of excellence with eye-catching colour work. The Super-Cousins look excellent, even allowing for the dodgy new outfits. And in a nod towards the fact that these books are meant to appeal to women as well as men, Nicola ensures neither Lois nor Kara are super-busty.

As for that final page, it's the work of writers Keith Giffen and Dan Jurgens. The latter provides layouts for finisher Jesus Merino, and it's very professional, but not my cup of tea. I'm already sick of Daemonites, and I don't even read Grifter or Voodoo.