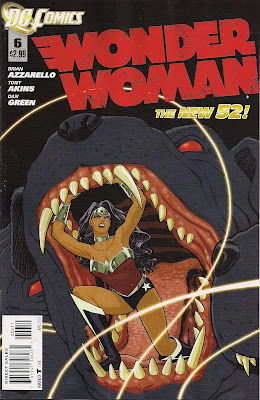 In which Wonder Woman and newly discovered semi-sibling Lennox sort out the tussle for Olympus between claimants Hades and Poseidon by, er ...

... to be honest, I don't really know. I know what I see, but not how the moments shown work together to tell the story.

Diana, Lennox and pals Hermes and Zola are in a tunnel by the Thames with Hades, and Poseidon looking in from the outside. Hera, the other claimant to the Greek heaven, shows up, naked but for her ridiculous feather cape. Diana and Lennox are suggesting that rather than fight, the brothers treat Olympus as a timeshare - Poseidon's by day, Hades' by night - with Hera as resident queen.

It makes no sense, obviously, but the idea distracts the three long enough for Lennox to snap a candle from Hades' head and throw it to Diana. Hermes tosses his teleportation staff to her, too. Diana throws the candle at Hera. There's a magical wave on the floor. Lennox protects Zola from an explosion. Diana and Hera are suddenly in her Olympian palace. They threaten one another across a shiny surface. Diana teleports away.

Zola observes that Lennox is made of stone, and Poseidon apparently refers to Hera as having been blinded. Neither of these things were obvious from the preceding pages. There is some kind of rocky effect in the panel of Lennox covering Zola, but there's no sense that he's generating, or becoming, stone. And there's nothing at all to indicate Hera has lost her sight - perhaps Poseidon is using 'blinding' as a synonym for 'distracting', who knows?

DC's solicitation for this issue, among other things, asks: '... what does Lennox know that Wonder Woman doesn't?' I have no flaming idea.

What I do know is that the climactic pages of a six-issue story should be a lot clearer than this. What's the deal with Hades' head candles? What's that pool? Why did Diana take Hera across the dimensions for a simple pouting match? Since Hera zapped her way into the tunnel once, why doesn't she do so again after Diana cuts and runs?

If a lifelong Wonder Woman fan who has read every issue of this New 52 relaunch can't figure out what's going on, what chance has a first-time reader trying this book because of the buzz? Oh for a Marvel style recap page - they're great at explaining things that have never been seen in the actual stories.

Art and script just don't gel .Things happen but the progression from incident to consequence isn't there. Writer Brian Azzarello seems more interested in the gods throwing daft puns at one another (Poseidon to waxy-headed Hades: 'Oh lighten up!') than in making clear what's going on. At the beginning of the book, for example, Diana is fighting Poseidon on the surface while Lennox chats to Hades below. It seems Lennox is somehow transmitting the conversation to Hades, but it's not clear how, or whether the impression is the result of attempts to link scenes in a stylish manner. Instead we're given nudge nudge wink wink exchanges about sex, and excruciating lines such as 'Jus' Lennox, Lord Hades. Leave the mistah for me sistah.' Letterer Jared K Fletcher was likely in pain while having to spell out that one.

It's not all bad; there's a decent - if over-bloody - scene of Diana beating centaurs with a spot of pole vaulting, and a decent surprise ending leading into Diana's upcoming trip to hell. The art of Tony Akins and Dan Adkins has some good moments outside of those confusing three pages, and Matthew Wilson's colouring is pleasant. The cover by regular artist and co-plotter Cliff Chiang is a striking take on a classic idea.

But overall, this is one unsatisfying comic. After six issues I'm no closer to knowing who this latest version of Wonder Woman is. She wins the day, but only with a plan Lennox came up with, and the rest of the 'week' looks to be more of the same. Gods and monsters and clever-clever cryptic dialogue and mysterious plots and bargains ... I enjoyed the first couple of issues but the increasing starring role of the gods, and parade of half-explained events, has me frustrated. Editor Matt Idelson really needs to sit down with his creators and explain that we readers don't actually know the story that's in their heads. Spell it out. And remember who the star of the book is meant to be.
Brian Azzarello Cliff Chiang Dan Green DC New 52 Jared K Fletcher Matthew Wilson Tony Akins Wonder Woman #6 review