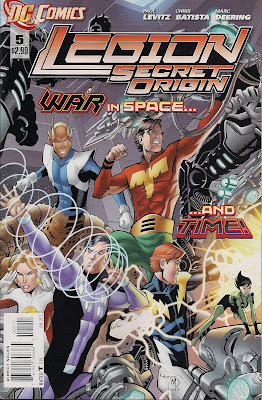 The Legion's first attempt to recruit Superboy in the 21st century is stymied when an unknown, powerful force reaches out and tosses their new time bubble back to the future. In the 31st century that same being is possessing United Planets security wallah Mycroft and ordering him to kill Legion benefactor RJ Brande.

Having returned to their own time without Superboy, Saturn Girl, Cosmic Boy and Lightning Lad join their teammates in outer space, to take on the unidentified warships entering UP territory. It's their first time fighting outside Earth's atmosphere, but the tyro team takes out their enemy, with much of the credit going to newest member Ultra Boy.

As the book closes, with Mycroft about to spring a trap on Brande, we see that the being who's taken him over is ... the Time Trapper.

Well, probably. That's my interpretation of the shadowy figure drawn by artists Chris Batista and Marc Deering. And it makes sense, given this villain's apparent mastery over time. We'll find out for sure next month, in the conclusion to DC's latest origin of the Legion (collect 'em all!). 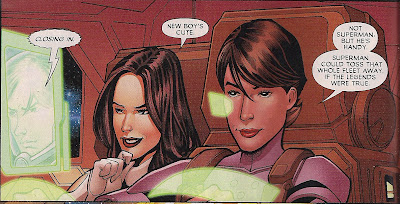 My favourite moment this time isn't one of the strands already mentioned, but a tiny bit of characterisation involving Phantom Girl and Triplicate Girl; it's nice to see the beginnings of the Legion's classic couples (click on image to enlarge). Well, one of' 'em, anyway - Triplicate Girl never got further than mooning over Superboy in previous continuities.

Other commendable bits of characterisation in Paul Levitz's breezy script see Invisible Kid showing Brainiac 5 that while he may be as clever as he thinks he is, others have smarts too; and Gim Allon being colossally cheesey.

The art's bright and bold, as befits a Legion origin, but Batista over-elongates his characters, at times. The black-clad Invisible Kid, in particular, looks for all the world like he should be going by Stick of Licorice Lad.

With five down and one issue to go, I can't see this mini-series coming up with an ace now to blow me away. This most detailed retelling yet of the Legion's beginnings is a pleasant read, but entirely missable. Really, it's only for longtime fans with pockets as big as Colossal Boy's.
Chris Batista Legion of Super-Heroes Legion: Secret Origin #5 review Marc Deering Paul Levitz