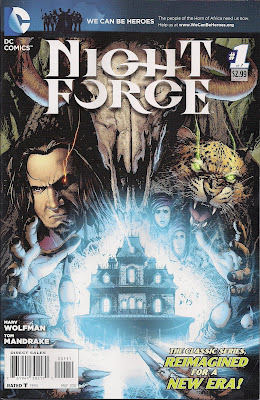 There are dark corners in the DC Universe, areas so secret that even the mystical heroes doesn't notice the evil that lurks there. But one man does. Baron Winters, master of Wintersgate Manor in Washington's Georgetown, is ever on the alert. He claims an aristocratic heritage but some say he's merely a jumped-up carny. One thing's for sure - upset the baron and you'll be staring into the face of his cheetah companion, Merlin.

The baron is back in this seven-part mini-series and while he's changed physically since we saw him last - he's gone from sinister to almost sexy - he's recognisably the same guy. Still manipulating unwitting pawns for the greater good, giving them only the information that serves his purposes, and if they get killed along the way, well, these things happen.

In this debut by Marv Wolfman and Tom Mandrake, Winters brings in two new members for his ever-changing 'Night Force', cop Jim Duffy and student Zoe Davis. Duffy is beginning his last day on the force whereas Zoe has just survived a murderous attack. Soon the pair are knee deep in shadowy demons, dodgy federal agents and mystical conspiracies (click on image to enlarge). 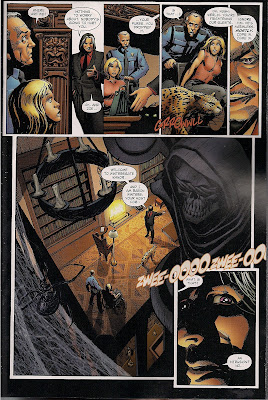 And I love it. Tom Mandrake conjures up a world in which the bogeyman isn't under the bed, he's sitting on it and climbing towards you. Pages drip with darkness and gothic detail, angles unsettle and eerie artworks frame the frames. And what Mandrake doesn't show with his pencils and inks, Wolfman tells with his well-honed words. The Night Force concept, which he created with Tomb of Dracula partner Gene Colan, allows Wolfman to play to the horror strengths he developed on that Marvel book back in the Seventies. His words describe a world of horror, in which ordinary men and women stand little chance of surviving the dark powers that surround them. The only hope is to confront your fears head on and trust someone, somwhere is watching out for you. And even if you live, there's no guarantee you'll retain your body parts. Or sanity.

Sure, the tropes are familiar - a girl who dreams of devil worshippers; a cop who's braver than he knows; a man who knows much, but says little; a house of secrets and mystery - but they're blended into an intriguing mystery with such style and confidence that Night Force reads as fresh as any of DC's New 52 series.

Credit, too, to colourist Wes Hartman, who knows when to apply bright tones without wrecking the mood, and letterer Wes Abbott, whose urgent style recalls Tomb of Dracula letterer John Costanza.

Hartman also colours Leonardo Manco's cover, a beautifully composed and executed piece of work marred by the linewide We Can Be Heroes banner forcing the sharp new logo too far down into the image area.