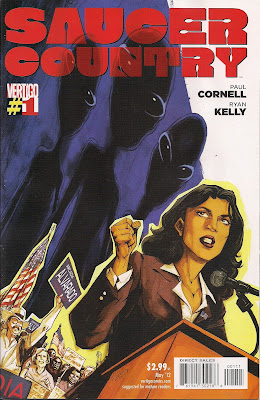 If Paul Cornell ever gives up penning science fiction, he could make a mint as a political speechwriter. Seriously, the oration at the heart of this Vertigo title's debut issue had me itching to be a fictional American, just so I could vote Arcadia Alvaro in as president.

Mind, if certain beliefs held by the New Mexico governor are made public her chances of reaching the White House are slim. For she's convinced she was abducted by terrifying extraterrestrials, and presidential power is her best shot at protecting Earth from them.

It seems her ex-husband Michael shared whatever she experienced while, over at Harvard, academic Joshua Kidd talks to a pint-size pair of Naturists only he can see. Other characters worth meeting include Arcadia's shady security chief Fausto, right-hand man Harry and speechwriter Chloe. It's obvious Cornell has thought through his characters and storyline at near-atomic level, and I can't wait to see what's to come.

His partner on the book is Ryan Kelly; whose skill at making ordinary people look as if they have actual pasts and inner lives is invaluable on a comic book that can't rely for visual interest on fight scenes and capes. Mind, there are towels.Very sinister towels ...

With new Vertigo titles, the big decision is whether to follow in single issues, or wait for the trade. Snub the singles, of course, and there's no guarantee a series will run long enough for trades to appear. On the basis of this first issue, with two superb storytellers on sparkling form, I'll be buying Saucer Country as it appears monthly. Heck, I'd hate to miss the end because I got abducted.
Paul Cornell Ryan Kelly Saucer Country #1 review Vertigo