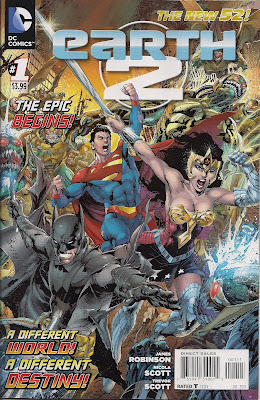 The war between Earth and Apokolips rages. Superman, Batman and Wonder Woman enact a desperate plan to save the world from Steppenwolf's Parademons, but the price is high. And when the dust clears, the only heroes around to welcome a new dawn are Robin and Supergirl. And them not for long ...

... five years later, Earth is a world without superheroes, but not inspiration, as broadcaster Alan Scott ensures people don't forget the sacrifices made. Meanwhile, college graduate Jay Garrick is discovering he's anything but a hero to his exiting girlfriend, as she rips into his character. By issue's end, at least one of these men is on the verge on a destiny he couldn't have dreamt of.

So here it is, Earth 2, one of four replacement New 52 comics debuting this week from DC. And even given the track record of core creators James Robinson and Nicola Scott, this is better than I could've hoped for. True, this isn't your father's Justice Society of America, but the comic rings with the values held by DC's first super-team: valour; friendship; sacrifice; love. Forget the pre-publicity from DC that had fans fearing the Earth 2 versions of Superman, Batman and Wonder Woman would be bloodthirsty anti-heroes, they're very much the heroes we know - but ones viewed through the lens of war. Wonder Woman slices through Parademons, but the creatures from Apokolips have killed so many dear to the heroes, and if allowed to live, will only kill more. We don't see Superman slaughter, and I suspect he still holds back. As for Batman, it's fair to say he takes out a few baddies.

The other fan fear was that the so-called Trinity would dominate the book, to the exclusion of such promised heroes as the Flash, Wildcat and Green Lantern. Not gonna happen. The Big Three are taken off the chessboard, clearing the way for a second wave of heroes.

And that's 'wave', not 'generation'. The heroes about to be born are still the first generation of Earth 2 heroes, they just debut a little after the founders, as they did in the Golden Age of comics. And as it was in the halcyon days of All-Star Comics, Superman and co won't be around, but their presence will surely be felt.

Robinson's script is a cracker - pacey, confident, revealing characters through the fires of war and the quieter conflicts of peacetime. We get to know Superman, Batman and Wonder Woman, and are introduced to Supergirl and Robin before circumstances shunt them off to Earth 1 (and another of this week's new titles, Worlds' Finest). The Apokolips conflict also introduces US Army sergeant Al Pratt, who's set to show that might isn't a matter or height as the Atom. And there's a grunt named Harper, who may turn out to be a new version of the Guardian.

There's no doubt Jay is going to be the Flash, and there's a welcome twist to his origin here, one that makes sense in terms of his traditional image, while linking him to one of the lost heroes. As for Alan, he's on his way to China, so I'd not bet against him coming across a lantern of emerald hue.

My favourite scene sees one of Wonder Woman's patrons manifest on Earth to tell her just how desperate things are, and to deliver a very personal message of thanks. It fits the story perfectly, while reminding me just how much I miss the relationship Diana once had with her gods.

It also gives penciller Nicola Scott and inker Trevor Scott a standout moment in a book that is nothing but standout moments. The visitor blazes across the page, leaving no doubt that this is an unearthly creature, and one whose influence will be felt for a long time to come. The emotion Diana feels is palpable, spurring her on to greater heights.

It's wonderful, and sad, that the Diana we meet here seems so much more like Wonder Woman than the New 52 version; a beacon of hope and courage. And her costume looks so much better than the 'real' Wonder Woman's that it's ridculous. The same goes for the outfit worn by Superman, a sleek update on the classic. As for Batman, well, you can probably guess.

The battle against the parademons is glorious, as both sides attack as their natures demand, in a fallen city.

And when the peace comes, Scott, Scott and colourist Alex Sinclair, whose contribution is immense, show they're equally good at drawing the everyday. Well, the everyday so far as a universe filled with heroic potential is concerned.

Kudos, too, to Dezi Sienty for a top job of lettering this extra-sized issue, editors Pat McCallum and Sean Mackiewicz, and everyone else involved in this corker of a debut. Such as cover artists Ivan Reis, Joe Prado and Rod Reis, who produce a great tease for the interiors.