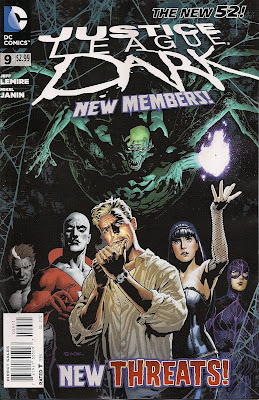 In the Amazon jungle, longtime Justice League foe Felix Faust is gathering an army. The magician is stronger than ever, having gained control of a devastatingly powerful mystic artefact. US Government mage Dr Mist has been captured after being sent by Colonel Steve Trevor to learn Faust's plans.

Who ya gonna call?

Justice League Dark, of course. Except the loose alliance of supernatural heroes went their separate ways after their initial missions, with two of them - Shade the Changing Man and Mindwarp - apparently lost for good. Trevor appeals to John Constantine, Hellblazer, to get the band back together to rescue Dr Mist and stamp on whatever Faust's plans are. And the con man magician agrees, on being promised a few minutes alone in the government's legendary Black Room, treasure house of mystical artefacts - Trevor's happy to turn a blind eye while a trinket or two goes missing.

And that opportunity persuades Zatanna to come along too, once Constantine asserts that the storehouse contains the top hat of her father, Zatara. It's something she'd give her right arm for. With Zee on board, a reluctant Deadman and vampire Andrew Bennett sign up too. Madame Xanadu, who initially brought the group together, refuses - she's had enough of Constantine and his double talk. But they do have a new ally to make up the numbers, mysterious plant being Black Orchid, who works for Trevor.

The team confronts Faust and his cult near the border of Peru and Brazil, beating back wave after wave of magical creatures to rescue Dr Mist. He reveals the hiding place of Faust's power source, an 8th-dimensional map to the 'four most powerful magical artefacts that ever existed'.

As for what they are, well, I enjoyed being surprised and if you buy the book, and are familiar with the magical side of DC's Vertigo imprint, you will too. It's safe to say the items are something I thought gone from DC lore for good.

And with one issue, Justice League Dark flies to the head of the New 52. New writer Jeff Lemire keeps well away from Shade the Changing Man, who never works in a team setting; Mindwarp, a Flashpoint oddity no one this side of creator Pete Milligan understands; and Enchantress, who was well and truly booted from heroinehood in the opening arc. And while I've liked Madame Xanadu since she opened her Doorway to Nightmare, she works best as a distant mystical presence rather than a frontline mage.

As for those who do make the cut, Zatanna fits because she's a longtime team player; Constantine is fun since while he professes not to play well with others, his knack for manipulation makes him a natural leader; Black Orchid has the disciplined mindset of the trained spy; Deadman thinks of himself as a superhero; and Andrew Bennett is a formidable wild card.

As for Dr Mist, he's an unknown quantity right now, but at the very least, he's getting a fantastic costume.

Lemire introduces his cast and their mission stylishly and efficiently, ending on a note that promises a wild ride over the next several issues. With suspicion, sarcasm, disdain and haughtiness among our motley band's personality characteristics, there immediately arises an entertaining chemistry (click on image to enlarge). 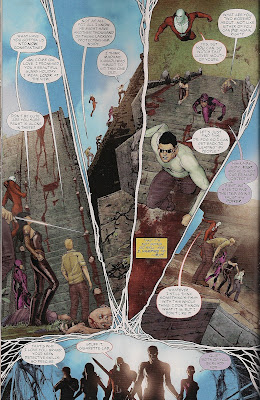 While Lemire underplays how dangerous Faust has been over the years, he shows that the enchanter is no fool. For one thing, he understands Constantine's true power ('That tongue of yours is poison'). I do love Constantine as channelled by Lemire, as it seems he has a knack for working class English argot, using phrases such as 'dead effective' and even slipping in a cheeky 'wanker'.

Tying the story into the recent DC New 52 Free Comic Books Day special via the Black Room should give this title a readership boost, and hopefully people will like what they see. I know that while I enjoyed earlier issues, I like this a whole lot more - there's the same enjoyment of great characters in a spooky story, but a more accessible narrative style and greater engagement with DC's wider universe.

I'm delighted, though, that artist Mikel Janin has stuck around, as his characters are simply wondrous to behold. Constantine, Deadman and Black Orchid retain their classic looks, Dr Mist is getting that makeover and I Vampire is sex on a stick. The only visual I'm unhappy with is Zatanna - Zee looks like just another brunette in a frilly corset. I hope Constantine isn't lying about that top hat (we don't see the photo of the Black Room he claims to have viewed) as donning it would instantly restore some of the backwards magician's visual spark.

And it's not just the look of the players, it's the environments too; whether it's John's London flat, Zee's theatre or Faust's lair, the settings convince, and don't vanish after one establishing shot. As for the magical effects, crucial in a book such as this, colourist Ulises Arreola captures lightning in a brilliantly toned bottle.

If the first few issues of this series weren't what you were looking for in a mystical Justice League book, give this story a chance - a new team on the creative side makes for a splendidly entertaining new team in the comic itself.
Andrew Bennett Black Orchid Black Room Deadman Dr Mist Felix Faust I Vampire Jeff Lemire John Constantine Justice League Dark #9 review Madame Xanadu Mikel Janin Steve Trevor Ulises Arreola Zatanna