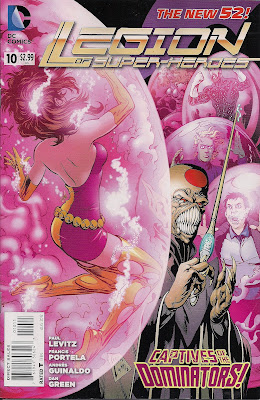 Brainiac 5 and Dream Girl have been kidnapped by the Dominators and locked up on the planet Panoptes. They want to add the Legion genius' DNA to their gene pool, and are considering a new caste with Naltorian-style precognition. On Earth, the United Planets has banned the Legion from mounting a rescue mission because there's no strong evidence that the Dominators are behind the vanished pair. Leader Cosmic Boy sneaks into the Dominator embassy in 31st-century Metropolis to find the evidence that will untie his hands.

Not all Legionnaires are willing to sit back and wait for the UP's go-ahead. Dream Girl's partner, Star Boy, resigns and organises a team of non-serving heroes comprising Legion Academy instructors Duplicate Damsel and Bouncing Boy, and students Mwindaji and Otaki.

Dream Girl nods off in the hope of receiving a helpful prophecy, and finds good news and very, very bad. Then she and Brainy are attacked over a most unappetising lunch.

And on a Legion cruiser, we see that the rescue team has a secret weapon ...

What is the sound of one hand typing? Because my other one is clapping right now, applauding writer Paul Levitz for his best Legion script in years. With each issue, he finds more of the old magic and this chapter is as good a Legion story as I could wish for.

There are surprises in the form of stodgy old Cosmic Boy turning spy, and the membership of the rescue team. Action as Dream Girl and Brainiac fight off deceptively cute Dominator drones. Characterisation with married Legionnaires Duplicate Damsel and Bouncing Boy reminding Cosmic Boy that Legionnaires don't bow down to politicians when their own are in peril. And new faces in the form of tracker Mwindaji and telepath Otaki.

And while there are nods to Legion history as Duplicate Damsel discusses her deaths, and Brainy and Dream Girl recall previous imprisonments, they're so brief in the former case, and subtle in the latter, that any new readers won't be put off. With luck, they'll be pulled in by a clearly told, pacy story showing how Legionnaires react under different types of pressure, whether it be political or life-threatening.

I've a couple of favourite moments: Dream Girl's reaction to news that the Dominators have ranked the Legion members according to how dangerous they're considered; and Duplicate Damsel's response to Bouncing Boy's fretting about their endangering students (click on image to enlarge). 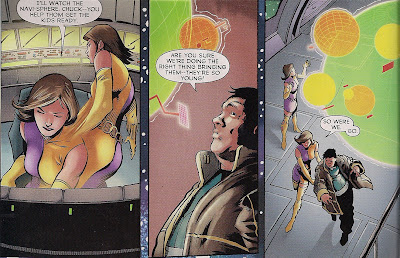 Both scenes speak to character and history, while moving the story along - Levitz really does know what he's doing.

As does artist Francis Portela, who pencils and inks 'only' half the Javier Mena-coloured issue this time, but does so beautifully. His clean lines define the current Legion, whether delineating striking heroes, creepy villains, future scenery or weird science tech (anybody else lusting after a 'data-vampire'?). Cosmic Boy, in stealth suit, ripping his way into the embassy with magnetism makes for a cool splash page, while Dream Girl and Brainy's tussle with Dominator cannon fodder is ickily intense.

Handling the rest of the pencils is Andres Guinaldo, a new name to me, but hopefully one I'll be seeing across the DC Universe. Because his work on the rescue team scenes, inked by the ever-excellent Dan Green, is just splendid - first he gives us steely determination as the renegade Legionnaires tell Cosmic Boy they're leaving, then their doubts as the reality of the challenge hits home. His Metropolis has a real buzz to it, full of fantastic buildings and aircraft. Plus, he draws an adorable Comet Queen.

Oh yes, the most enthusiastic Legionnaire of all is here, alongside her idol, Bouncing Boy, and when he brushes her off there's a foreboding-filled panel of Comet Queen alone, in shadow. Oh dear, please don't let another Legion death be coming. I realise it's a tradition, but there's another, better tradition about to make a comeback, if Dream Girl's prophecy isn't skewed.

If the nigh-edible cover by artist Steve Lightle and colourist Guy Major is likewise a taste of things to come, the Dominators are going to get their hands on the rescue squad. I'll certainly be getting my hands on next issue to find out for sure.
Andres Guinaldo Dan Green Francis Portela Guy Major Javier Mena Legion of Super-Heroes #10 review Paul Levitz