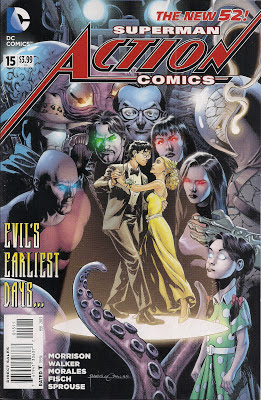 ... or Mrs Nyxly Explains It All. There's an awful lot of exposition this issue, but it's anything but awful, as Clark Kent's landlady, recently revealed as an emigree from the Fifth Dimension, gives him the big picture. In a truly fascinating instalment we see Superman on the roof of her building, remembering the confrontation with evil magician Vyndyktvx and the Anti-Superman Army on Mars that began last issue. Which is confusing to him, because he's recalling a fight that's not happened yet - Mrs Nyxly tells him it's more than two years in the future.

She reveals to Superman that Vyndyktvx messes with time and memory, displacing the flow of reality 'when he closes in for the kill'. Writer Grant Morrison gets the feeling across wonderfully with this panel (click on image to enlarge).

Mrs Nyxly tells a tale of magic and love and jealousy, one which reduces Superman to the status of just another ant, before restoring him to Featured Player. It's complicated, beautiful and demands to be read. Short version: failed court magician Vyndyktvx is envious of Mr Mxyzptlk's success in making the King-Thing laugh. This Mxy does by pulling not a rabbit, but a universe containing 333 worlds, from his hat. Whether that means he created New 52 Earth, or is 'merely' presenting it from his extra-dimensional viewpoint, is a matter for another day. The point is, Mxy's charm and charms earn him the favour of the king, and the love of his daughter, Princess Gsptlnz. Which eventually leads to 230 worlds slain at the hand of the Multitude, the king's death, his daughter's exile, Mxy's displacement to Earth and Superman's current, past and future situation, with an insanely powerful wizard after him ... if Mxy really is God, Vyndyktvx is the Devil.

And how do you fight the devil? It turns out that Mrs Nyxly had three wishes given to her by Mxy. She's used up two, but perhaps the third ... nope, she's killed before Superman's horrified eyes, without making that final wish. At least, she's told him she's not used it up. 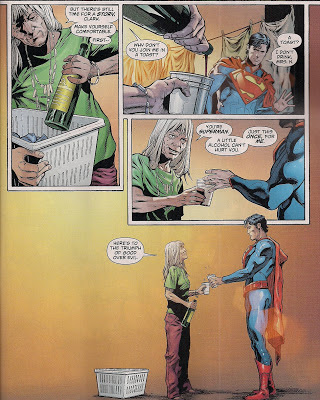 But look at the last panel here, her words, the subtle special effect over Superman - I wouldn't be surprised if she's just pushed the story in the right direction, with that drink, and a blood-spattered S-shirt, being vital elements in the spell's success. Let's hope so, because the story ends with Vyndyktvx about to destroy Clark in three time periods - on the night of his Smallville senior prom, in the moment after Mrs Nyxly's death, and in the future on Mars.

This is the issue that brings together everything author Grant Morrison's been doing in Action Comics, revealing how Vyndyktvx, the little man who first appeared in #1, has been meddling in Superman's life, and explaining the odd leaps in time and space that this series has seen. It gives Superman a massive dose of perspective, showing him there are higher powers that he's basically helpless against. And it sheds light on how Ma and Pa Kent died - for now.

The dialogue between Superman and Mrs Nyxly is touching, as he realises that she's been a bit of a guardian angel to him, making her death all the sadder. And the Easter Eggs are just wonderful - Morrison drags Silver Age super-pet Comet the Super-Horse and cartoon filler feature Super-Turtle into New 52 canon, along with some other familiar names and faces. Page by wonderful page, Morrison shows us that we've been reading one massive story and on this form, I don't doubt he has a killer ending ready to be revealed.

Regular pencillers Brad Walker and Rags Morales are both present and correct, and while I don't know the exact breakdown, it doesn't matter - both men do fine work, with inking support from Andrew Hennessy and Mark Propst, colours from Brad Anderson and the lettering talents of Steve Wands. They capture the drama and emotion of several worlds and lifetimes, bringing a pleasing intensity to the page. And the scenes flashing back to the Fifth Dimensional realm of Zrrff are done in a delightful storybook style, one which makes the slowly emerging horror all the worse. 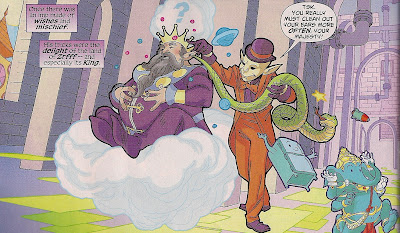 The storybook style continues in the linked back-up (above), which focuses on the romance of Mxy and Gsptlnz, and the question: just what is Mr Mxyzptlk's greatest trick? The answer is surprising, sweet and may well feed back into the main story. This is a gorgeous companion piece to the lead feature, courtesy of writer Sholly Fisch, artists Chris Sprouse and Karl Story, colourist Jordie Bellaire and letterer Taylor Esposito.