... until her boyfriend Mettle steps forward, offering to die in her stead. And he does, his metal-framed body blasted apart. Welcome to Murder World.

On the cancellation of Avengers Academy, writer Christos Gage was sanguine, happy to have created and developed characters who could be used in the Marvel Universe in the years to come. One month later, Mettle - a character he's enriched over numerous storylines - is dead. In this issue's lettercol, Avengers Arena writer Dennis Hopeless says of Mettle: 'He died a hero's death and will be missed by all of his fans, me among them.'

Dennis Hopeless. Not a man to have in your corner.

I get it. To show this book means business, killing an established character is the way to go. Hopeless even gives Mettle and Hazmat a good scene pre-Murder World, and some battlefield characterisation, so that readers who don't already know them can care. But blimey, it seems rude, grabbing a hero from a just-cancelled book and immediately offing him - in silhouette, but still on-panel, and horribly. Even if the ever-generous and professional Gage is fine with it, I'm not - Mettle is an interesting guy, and I looked forward to seeing him grow further. Will I care as much when Hopeless slays some of the new characters he's come up with here, such as Anachronism or Kid Briton? Nope, cos I've not been following them for three years, and anyway, they've been created to be cannon fodder. 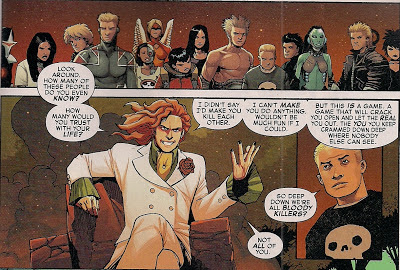 I'm not sure I'll be here for future deaths, mind. The idea at the heart of this book is pretty vile, even while the execution is more than decent. The fires of war aren't the only way to show what people are made of; let's see the heroes in all kinds of situations, not just life and death ones. Everyday moral dilemmas can be just as interesting as ones taken in war zones. But given that Marvel isn't going the rip-off route and charging $3.99, I'll maybe give this comic an issue or two, see where it's heading.

At the very least I'm guaranteed great-looking pages, with Kev Walker on art duties. Walker is as adapt at emotion as action scenes, knowing when to pull back, when to go close and when to let loose. And his pages just look exciting. Colourist Frank Martin also serves the script well, knowing when to go splashy and when to dial it down. And the Battle Royale homage cover by Dave Johnson references one of this book's influences as honestly as does Arcade in the script ('Got the idea from a couple kids' books I read in the pen.').

This isn't really Arcade, of course. Not the one who's been bugging Marvel heroes since his debut in Marvel UK's Super-Spider-Man comic in 1977. Hopeless may tell us it is, but it isn't. Arcade isn't a god. He doesn't kill if there's no money involved. He gives heroes a slim chance of escape from his traps. And if, as he claims, he wants to rescue his reputation, he knows that murdering new heroes rather than name characters really isn't the way to go. Nope, this guy is the Eeevil Dr Maguffin, there purely to get the story going. Hopeless would've been better off just inventing someone new rather than rewriting an existing favourite.

As for the kids, they capitulate far too easily, standing around like the mis-written Avengers in the Disassembled storyline, waiting to be picked off. Yes, this Arcade has immense power, but there are 16 heroes here. Would X-23 not hack at him until she dropped? Would Nico of the Runaways really not find some way to cast a spell with her staff?

Apparently not while there's exposition to be given.

This all happens on Day One. The book actually opens on Day 29, when the last two standing, apparently -  Hazmat and X-23 - are having a brutal fight. It's a well-written, intensely dramatic scene. Why Hopeless would give so much away, though, I have no idea; he could be kidding, but at the very least the tension around Hazmat's fate at the end of this issue is well and truly scunnered.

The more I think about this comic, the less I want to read future issues. The characters I like in here, I don't wish to see slain, or get killed because they refuse to kill or let someone die. The characters I don't know, I can live without. And supporting this book sends Marvel the wrong message - I'd rather it were cancelled quickly and the talented creative team reassigned. Decision made - I'm leaving Murder World.
Arcade Avenger Academy Avengers Arena #1 review Dave Johnson Dennis Hopeless Frank Martin Hazmat Kev Walker Mettle